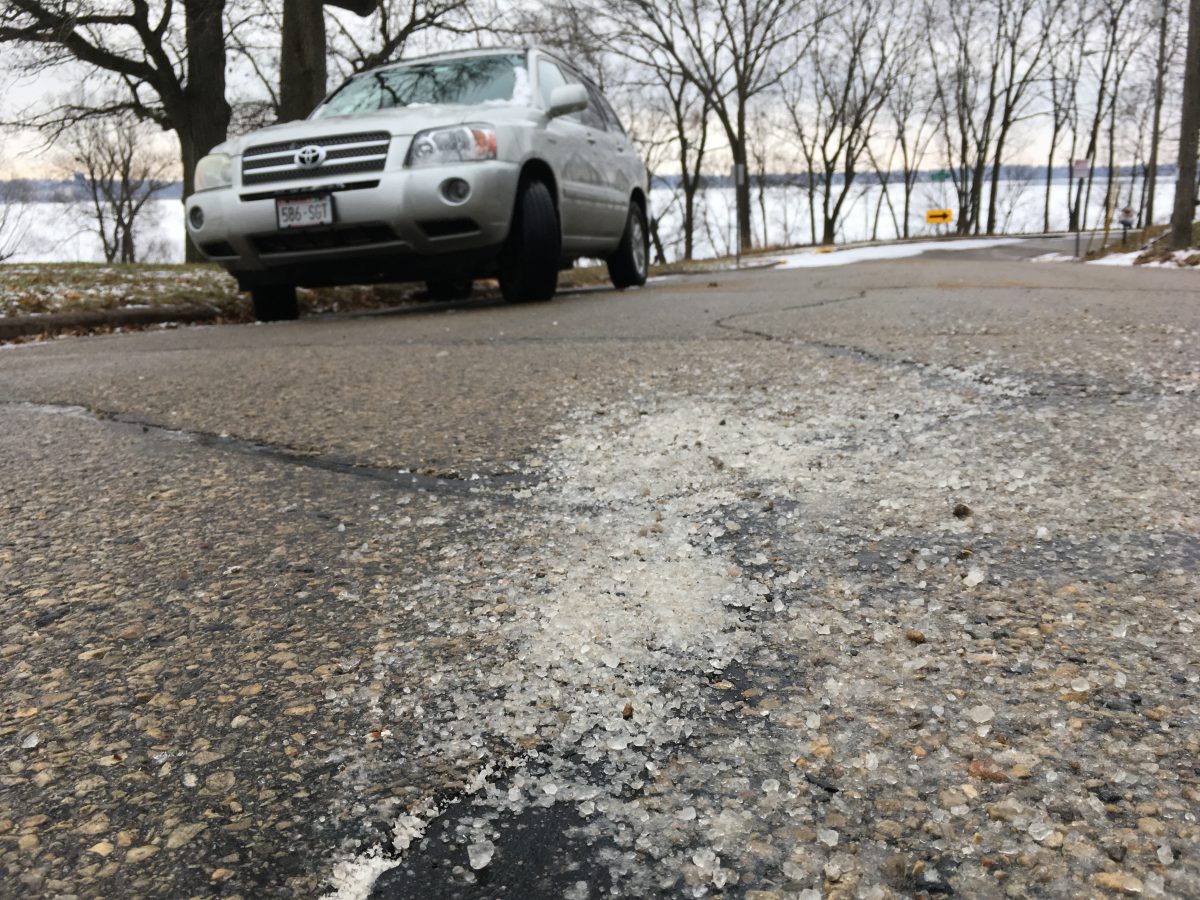 Winter in the colder climes of North America means a lot of things – frozen lakes, white blankets of snow and, far too often, the crunch of salt crystals underfoot. While we use salt to keep roads, parking lots and sidewalks ice-free, those leftover piles of undissolved crystals mean far too much salt was put down in the first place.

And this high-salt diet of ours is having a big impact on our lakes. They are getting saltier. Lake Mendota’s salinity is now 25 times higer than it was in the early 1900s. While it is still a long way from being toxic to the freshwater organisms that call it home, it’s a troublesome trend and chloride concentrations in some bodies of water, like Lake Wingra, are already at concerning levels.

We’re not saying to stop using salt. It can be a necessary and useful tool in making some slippery winter surfaces navigable. But there are right and wrong ways to use it. The fabulous folks at Wisconsin SaltWise have all sorts of info on how and when to appropriately salt, so check them out when you get a chance.

To learn more about this problem and some potential solutions we’re re-posting the following article from our archives. Enjoy!

Originally published Nov. 19, 2018 – In the early morning hours this Saturday, I awoke to the first snowplow of the year scraping down my street. A few hours later, it took another pass. Then, as I was sipping my first cup of coffee, I heard the distant scrape and rumble of the plow blade grow closer as a truck from the City of Madison Streets Department began a third approach.

I walked to my window expecting a larger-than-expected snowfall blanketing my view. Instead, I saw a dusting. (According to the National Weather Service, totals on my side of town topped out at .05 inches).

While a couple of overly optimistic kids were already out on the neighborhood sledding hill, the hill was more grass than snow. The street was clear. The snow on my sidewalk was already melting away.

But here the truck came anyway, scraping its blade along the clear street and spitting a shower of road salt out from the hopper attached to the truck bed. That salt wouldn’t be much use melting snow and keeping the road clear, but it will end up flowing downhill and into Lake Monona if Friday’s forecast for rain holds true.

Our Lakes Are Getting Saltier

That salt will also contribute to a growing trend. According to research from Center for Limnology (CFL) faculty member, Hilary Dugan, North America’s lakes are getting saltier. And this is mostly thanks to the use of salt to clear winter roads and parking lots here in the Midwest and the Northeastern U.S.

In fact, 44% of North America’s lakes are getting saltier. Here in Madison, “we’ve seen a tremendous increase in the chloride concentrations for our local lakes,” Dugan says. Background levels in the Madison lakes were around 2 mg/L in the early 1900s, and now they’re at 50 mg/L in Lake Mendota. These high salt concentrations are also showing up in streams, ponds and groundwater.

If current trends continue, many North American lakes will surpass Environmental Protection Agency (EPA)-recommended chloride levels in 50 years. According to a recent study Dugan led, 14 North American lakes are expected to exceed the EPA’s aquatic life criterion concentration of 230 mg/L by 2050, and 47 are on track to reach chloride concentrations of 100 mg/L by then, which is bad news for the plants and animals that call them home. While some species may be better able to tolerate salty waters than others, “our native species are adapted to freshwater,” Dugan says. “Salt will stress them out and any kind of stress is taking away from their ability to survive and reproduce.”

Elevated chloride levels have also been shown to alter the composition of fish, invertebrates and the plankton that form the base of the aquatic food web in lakes. Aquatic species richness and abundance can decline, and in extreme cases salinization can prevent lakes from mixing, causing low oxygen conditions that smother aquatic life and reduce water quality.

The good news, Dugan says, is that a lot of state and municipal transportation departments are working hard to reduce salt use.

One promising new method is to apply a mixture of water and salt called “brine” to road surfaces before a winter storm. Unlike the rock salt that we’ve been using since the 1940’s that often simply bounces off of the pavement and onto nearby medians and drainage ditches, brine solutions better stick to the road surface and often a more uniform coverage, which reduces the amount of salt use.

Dugan says the Wisconsin Department of Transportation (WisDOT) has conducted numerous studies and trials on brine and is already adding it to the winter roads arsenal. WisDOT, which Dugan says is one of the states “leading the pack” on salt reduction, is also being more judicious in salt applications in Spring, letting late March and early April snow showers simply melt away, rather than head out and dump tons of salt on our roads.

Still, we have a long way to go to solve the problem. According to their website, the state, on average, uses an average of 526,000 tons of salt per season. Reducing that use, says Dugan, is desirable for both the state and Wisconsin waters.  “It saves us money in the long run,” she says. “Salt is cheap, but it’s not free! So if they reduce use, they reduce their budget. It can be a win-win as long as we maintain that level of safety.”

The Problem with Private Parking Lots and Sidewalks

For anyone shopping at a big box store this holiday season, those snow-free parking lots come at a steep price. Road salt is used heavily during snow removal on large parking lots, which are often managed by private snow-removal companies that have no incentive to limit salt use, Dugan says.

The companies don’t want to be held liable for any slips and falls customers might experience on slushy or icy surfaces, so they “cake parking lots full of salt,” Dugan says, estimating that private snow removal companies may be responsible for as much as half our total road salt use. “There’s still a long way to go to cut that back,” she says.

Another problem (although it only contributes a fraction of the salt to our freshwater ecosystems) is overuse of salt on residential sidewalks. While homeowners may feel like they are protecting public safety by carpeting their sidewalks with salt (or just lightening their own shoveling duties) that civic-minded gesture points to a bigger truth about winter salt use – what we do on land ends up in the water. And, in the case of sidewalk salt, there is almost always a storm drain nearby ready to carry whatever is on the concrete into the nearest water body.

According to a Fact Sheet put out by Dane County, a large, fifty-pound bag of salt can pollute 10,000 gallons of water. On a smaller level, a teaspoon of salt can turn a five-gallon bucket of water from fresh to saline. The county recommends using only 1-3 cups of salt for 1,000 square feet of sidewalk.

While we’ve got a long way to go to cut salt out of our winter road, parking lot and sidewalk diet, Dugan says that we’re trending in the right direction.

Hopefully the recent experience of unnecessary salt use in my neighborhood was simply a function of the streets department responding to a forecast that didn’t quite match real-time conditions. Hopefully private businesses will realize that they can get suitable surface conditions with a lot less salt.

And, hopefully, next time it snows, we’ll all reach for the shovels before we start shaking out the salt.