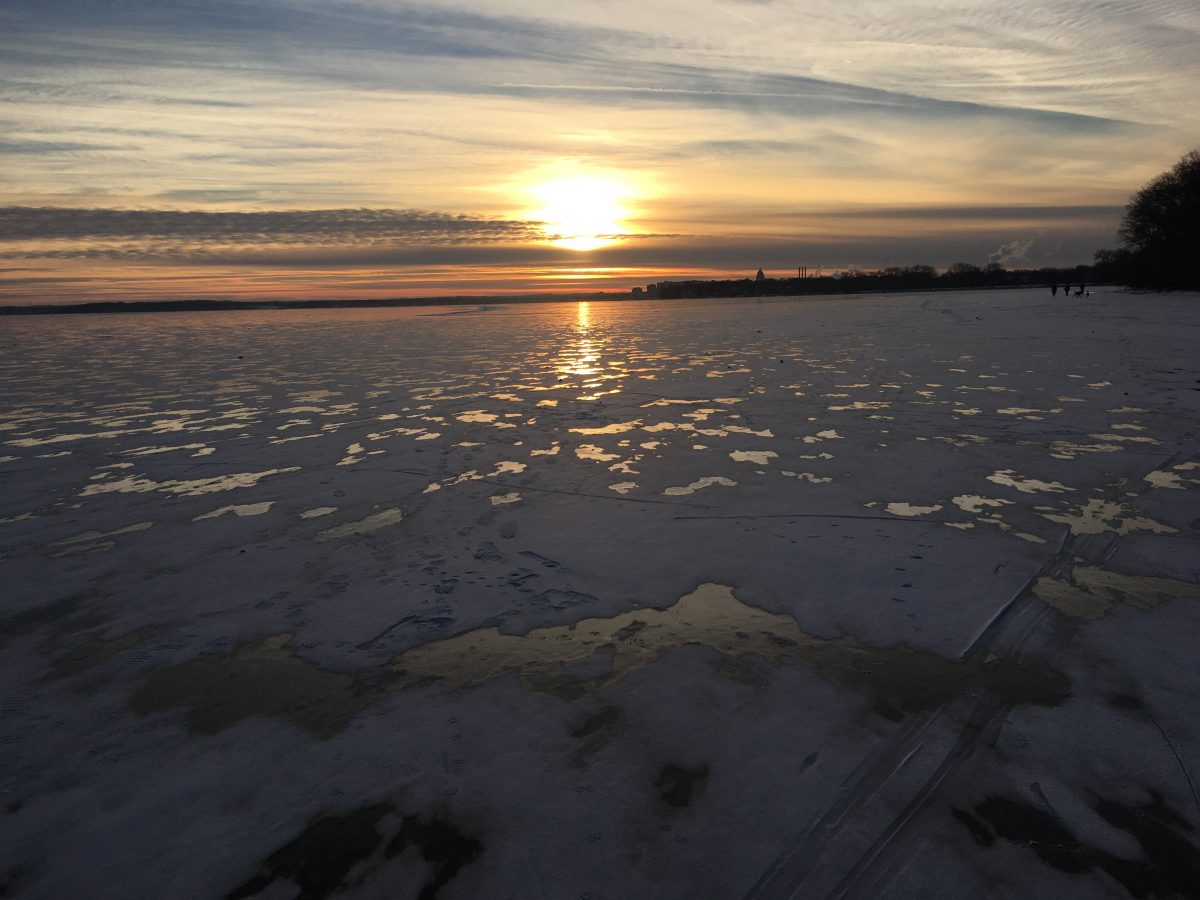 (This article was originally published January 22, 2018 and has been updated with photos from January 2022)

by Adam Hinterthuer – Two weeks ago, I walked down the hill from my house to do something I’d never done before. On the shoreline of Lake Monona, in the time it took my wife to get herself and our two daughters laced up, I clumsily cinched up a brand new pair of ice skates, my exposed fingers aching in the cold. Then I stood and took my first tentative steps out on the glassy frozen surface.

I grew up in Arkansas, where we most certainly did not walk on water at any time of year. When it did get cold enough to freeze, it was usually just a skim coat of ice. Pretty, but nothing like the stable surface I was skating on (if you can call what I was doing “skating”). Lots of other people were out, too. Skating, walking their dogs, fishing, even biking – using the lake in a way that is impossible for most of the year.

I gaped at the window beneath my feet. I could see right down into the lake where waves had molded ripples into the silty bottom. Aquatic plants reached toward the ice, moving almost imperceptibly with currents in the water below. (Okay, it was invasive Eurasian water milfoil, but the visual was still stunning). My kids and their friends stumbled about on their own skates, making dozens of intentional falls to the clear surface, leaning their heads together and exclaiming as they peered into the beautifully weird artistry of air bubbles or the odd fish frozen into a foot-thick sheet of ice.

It’s rare to have conditions exactly right to get a smooth, frozen lake with no snow cover. In the nine years I’d lived near the lake it had never been so perfect for a pair of ice skates.

But that, of course, was two weeks ago.

Today as I trudged to my bus stop, the lake shimmered with large puddles of water thanks to above-freezing temperatures and a relentless drizzle that, on January 22, I would have expected to be snow. No piles of plowed slush lined the streets. No cold, white coat dressed the sledding hill. Just the soggy, semi-frozen ground of Wisconsin in winter.

It felt like I was back where I’d grown up in the Ozark Mountains – where winter usually meant temperatures in the forties and frozen precipitation was a rare treat. My mind flashed back to a presentation I saw ten years ago as a grad student here at UW-Madison. A climate scientist showed an animated map where the state of Arkansas moved up on top of Wisconsin. This, he said, is the state our future climate conditions will mimic.

Now you could argue that this warm spell is “just the weather.” And you would be right. I can’t pin these current puddles on global warming. It’s hard to talk about climate in singular moments in time. There’s enough variability to confuse things – last week was cold and this week is warm and, sure, next year could be full of snow and good ice and consistently wintry temperatures.

But, even if next year is an epic winter, that ‘s still just the weather – it tells us little about long-term trends. What about the next ten years or twenty? Chances are that a lot more of those years will look like our current soggy January instead of winter as it ought to be. The winters of Wisconsin’s past – with deep snow and reliable ice are becoming the anomaly. This schizophrenic season is becoming the new normal.

According to the Wisconsin State Climatology Office, the highest mean (or average) temperatures for the four months of winter – December, January, February and March – have all occurred in the last twenty years. Based on ice records that go back to the 1850s, our lakes are, on average, freezing later and thawing sooner.

The impact of this change is, perhaps, best summed up by John Magnuson, our former director and a lifetime lover of Wisconsin winters. As he said in a post I wrote back in 2012:

“Human beings have a strong sense of place. They get homesick or long for the country they immigrated from and, in Wisconsin, our sense of place includes … winter. And in our area, that sense of place includes lakes. This sense of place affects how we see ourselves and what we do in our lives and what we hope our children will get to do in their lives.”
But, says Magnuson, our sense of place may need to shift to accommodate the new normal. “Historically [in the mid-1800’s] Lake Mendota had about 4 months of ice. And right now we’re averaging about three.”
Maybe the ecological or economic impacts of that change aren’t catastrophic, he says, but “on the other hand, I’m unhappy. I’m actually sad that we’re losing winter as we knew it.”

Of course, Magnuson’s sorrow goes well beyond Wisconsin. NASA recently announced that last year was the second warmest year in their 136-year record. 2016 was the warmest. In fact, 16 of the 17 highest global average annual temperatures have occurred since 2001. (Editor’s Note: 2019 and 2020 only made this trend stronger, coming in as some of the warmest years on record.)

These aren’t complicated theoretical climate models. These are simple thermometer readings. And they show that days like my adventure on ice skates are endangered.

I never thought I’d embrace winter. I remember my first year at college in Minnesota and the long, dark season with temperatures 40 degrees below freezing and spring taking seemingly forever to arrive. I longed to be hiking the Ozarks on a sunny, 40-degree day startling up roosting turkeys and listening for the hiss of a waterfall pouring over a bluff.

But I grew to love the muffled quiet of deep, new-fallen snow. The ambient clamor of a sledding hill full of kids. Snowshoeing through the woods trying to decipher animal footprints. And, as of two weeks ago, bumbling around on a frozen lake trying not to break my tailbone.

As those things change, I’ll survive. I’ll find other ways to spend my time and maybe the rarity of such days will make them feel even more magical. But, somewhere down the line, probably well after I’m gone, they may not even exist. And, like Magnuson says, that makes me sad.

To think that, at some point in time, in the Wisconsin my children inherit or maybe the Wisconsin they pass on to their children, the months of ice fishing and skating and cross-country skiing and gazing in wonder at a frozen lake will have slowly, almost imperceptibly, moved from magic to myth.