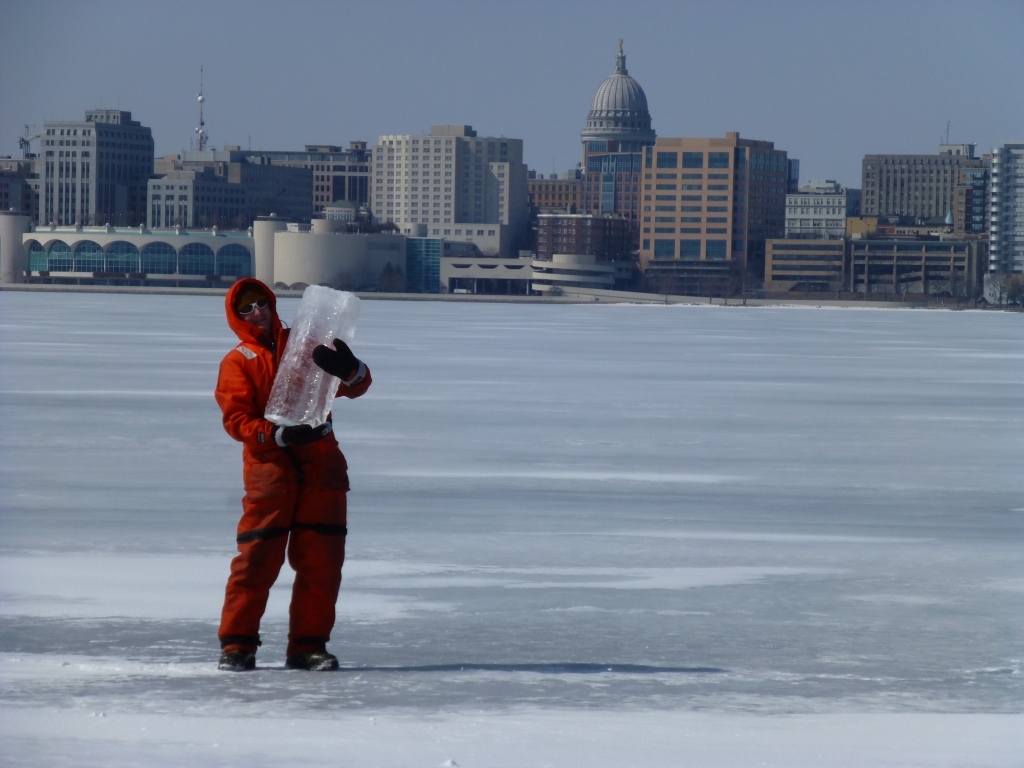 It’s November 14th and some lakes are already making ice in these frigid temperatures here in Madison. With Thanksgiving still yet to arrive, it definitely feels early for a freeze and that made us wonder – what’s it all mean for this year’s flu season?

Way back in 2012, we heard about, Jon Temte, then a professor in the UW-Madison Department of Family Medicine. Specifically, we heard that he had found a link between the freeze date of Madison’s Lake Wingra and the onset of Wisconsin’s winter flu season. Temte, who is now associate dean for public health and community engagement at the University of Wisconsin School of Medicine and Public Health, explained that he got interested in the variation of flu season from year to year in Wisconsin and asked an undergraduate student to compare flu season to all sorts of long-term datasets – from the dates of major winter holidays, to the annual duck and geese hunting seasons.

In the twenty five years of data he used to examine the timing of flu season peaks in Wisconsin, one variable kept popping up – the date that Lake Wingra froze over.

Limnology wasn’t completely foreign to Temte. His wife, Jo, did her graduate work at the Center for Limnology, receiving her masters in limnology and marine sciences as a student of John Magnuson. And Temte himself had a master’s degree from Oregon State University in biological oceanography. That said, he certainly didn’t expect his inquiry to lead him down a limnological path!

We sat down to talk with Jon about how he stumbled onto this connection between limnology and epidemiology. If what he uncovered hold true, this year could be a doozy of a flu season! (And not bad for ice fishing, either).

CFL: What first got you into studying Wisconsin’s flu season?

Temte: What I worked on in terms of my masters and PhD was the timing of reproduction in seals and sea lions and so I was very invested in seasonality and one thing led to another and I got more and more involved with work here [in Madison] at the state lab of hygiene. Similar to the study of lakes here, where we have the longest periods of study of freshwater systems in the world, [Wisconsin’s] state lab of hygeine [has] very long term data for influenza in the state. And over the years in terms of family medicine I have probably done more public health than anybody in my department and that’s led to doing a lot with infectious disease and that led to doing a lot with vaccines and policy.

So, several years ago, I just got interested in looking at the variation of flu season here. From year to year it will change and, going back a good number of years, I started getting interested in what might be causing some of the change out there. Flu viruses and influenza as a disease tends to be very seasonal so we tend to think of it as a wintertime virus. So in the northern Hemisphere, we typically have it November through March and the Southern Hemisphere is six months different. And there’s been a lot of conjecture as to what causes that, but not a whole lot of good study.

CFL: So, what made you look at ice on dates?

Temte: The reason I knew about that and, now I’m dating myself, but, 25 years ago when Dale Robertson was at the CFL [Temte’s wife, Jo, was then an MS student at the CFL and knew Dale’s], they used to have a pool as to when the lake would freeze. And rumor has it, I don’t know if this is true or just legend, but he was excluded for participating because he was always too close [with predictions].  But the long and short of it is that the lake  freezing was a nice intergrating function of the accumulation of cold [in the ambient outdoor temperature]. So we started building some models of the timing of the peak of influenza [outbreaks in Wisconsin] and lake freezing and you know, plugged in Mendota and Monona and Wingra and Wingra was always the best predictor. And it turns out there were actually two variables that really stood out. One was the freeze of Lake Wingra and the second was the timing of Thanksgiving, which isn’t terribly variable, only varying between November 22nd and 28th.

CFL: Can you explain why these two predictors are correlated with flu season?

Temte: If you look at all of our recorded cases [of influenza] over a 25 year period and if you start looking at average temperature, flu really kinda tends to like it when our temperature dips below freezing and it starts going away, on average, when we warm up above freezing. It also turns out that, it seems like there’s a pretty good trigger out there, not just for flu but also another common respiratory virus called respiratory syncytial virus,  but they both really seem to get going around Thanksgiving. And that makes really good sense for something that likes to jump from human to human, because we have such wonderful social mixing [during Holidays]. And there is, at least historically, during this period of time, the dates of Lake Wingra freezing. So when you put everything together, the best model I could come up with is, you look at the freezing of Lake Wingra relative to the timing of Thanksgiving and [it’s a good predictor of the timing of flu season]. The model is basically that, for each day Lake Wingra is delayed in freezing, the peak of influenza is delayed by about a little more than a day.

Why I think this makes sense is, if you have people getting together and it’s really cold, you really accelerate influenza. On the other hand if you have people together and it’s warm out and moist, I mean look at Thanksgiving this year, it was pretty warm and certainly not icy temperatures and you kind of lose that little kick you get from [a cold, dry] Thanksgiving.

CFL: Obviously there are times when Lake Wingra’s freeze doesn’t correspond with flu season, but this correlation is a fairly strong signal?

Temte: Basically what we do is take the amount of variability in the peak and we can explain away maybe a third of that variability just from this one factor being the freezing of Lake Wingra compared to the timing of Thanksgiving. Which isn’t too bad. In biological systems, you know, an r squared in the .35’s is interesting.

So we examined this period from 1980 to 2005 and I haven’t done it for a bit now, but for subsequent years it seems to hold pretty true.  I can usually [predict the flu peak] within a couple of weeks once I know when Wingra is freezing over.

CFL: What do the predicted effects of global warming mean for this correlation and flu in general? If the virus likes cold, dry weather, it seems warmer, wetter winters might disrupt flu season.

Temte: Well this is where you get into kind of the wild speculation. You take a year like this one (2012) where there’s just not much going on. We had very warm. moist air in December, there’s nothing going on flu-wise and then you pull the kids out of school for a week and a half. And even though they’re mixing with people and there’s a lot of travel going on, there just isn’t any background [for the flu] to get going. So we’re still seeing right now virtually no flu [in Wisconsin], which is incredibly, incredibly rare. The grand mean date for influenza in Wisconsin is January 21st and we’ve only had a handful of cases in the state so this is incredibly unusual. And once we see [an uptick in the reported cases of flu] we figure on about 6 or 7 weeks until we hit the peak. But now we’re already looking at 6 or 7 weeks from now which gets us into March and we start to get warmer air and conditions less favorable for the virus, so if we keep on this we’re likely not to see much at all.”

So we’re kind of getting into the wild speculations that some of the respiratory viruses are prone to becoming less significant in areas that undergo significant warming. There’s actually a interesting paper from England looking at the end of respiratory syncytial virus, and they’re finding long term trends that, with increasing ambient average temperatures, you shorten the season considerably. And they even speculate that, if this warming trend continues, the season gets so short it goes away.

CFL: This study must’ve been an interesting departure from your typical epidemiological studies.

Temte: I just look at the lake freeze and it’s kind of this magical function of all these variables you can’t measure. When you do things like this, it’s very nice to have discrete things and a lake freezing date is a very discrete point in time. And to get there, you have all these functions of temperature and wind speed and how much the water is mixing, and all these things contribute, but it really stuck out as a kind of interesting predictor here. Who would’ve thought that the freezing date of a lake and the timing of epidemics have anything to do with each other?