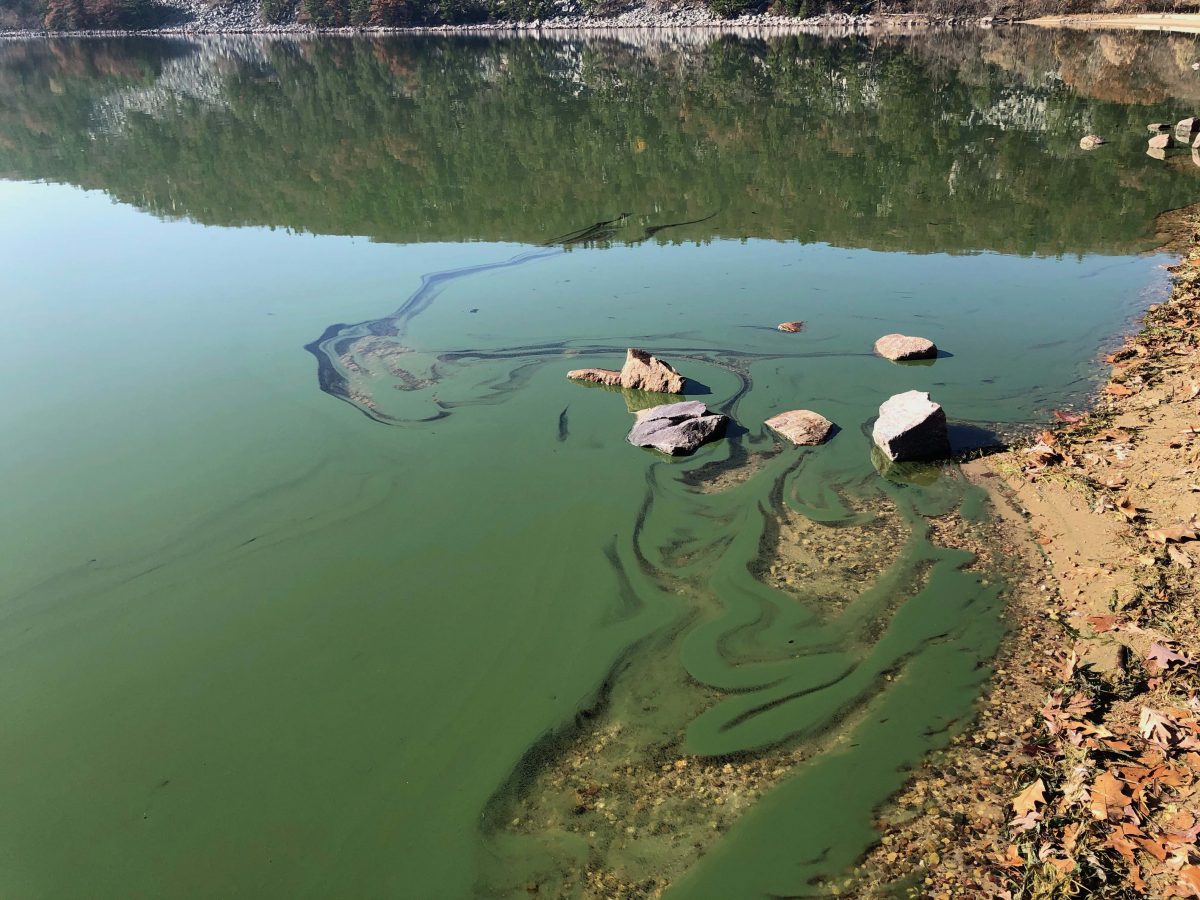 Earlier this month, Richard “Dick” Lathrop, a long-time limnologist and honorary fellow at the Center for Limnology headed out to Devil’s Lake in Devil’s Lake State Park to take a sample of an algae bloom. We asked him to send a report of what he found.

By Richard Lathrop – While many people think of algae blooms as a summer problem, fall blooms are also common – although blooms that last well into December are less so.

There are several different kinds of “free-floating algae” (phytoplankton) that can grow in a lake causing the water to take on a distinct color specific to the species of algae when they become dense enough to form a “bloom.”  The blooms that most people worry about are blue-green algae – more correctly called “cyanobacteria” as they are not true algae but bacteria with photosynthetic pigments.  Cyanobacteria blooms can be impressive because some species float to the surface on relatively calm days, later to be pushed to downwind shorelines where they sometimes pile up into noxious scums.  However, what makes these shore-area pile-ups particularly worrisome is certain species of cyanobacteria can produce toxins.   Which species of these assorted phytoplankton organisms becomes dominant under what conditions depends on all sorts of variables that makes studying them interesting.

The different types of algae and cyanobacteria all compete for nutrients and light, and things like a lake’s temperature can favor one species over another. Sometimes zooplankton like Daphnia (water fleas) eat so much of a particular species of algae that a less tasty species flourishes like large colonies or filaments of cyanobacteria. Or fish or aquatic invertebrates can eat the Daphnia that would be eating the tastier species giving the inedible species room to grow. All of these conditions can affect which species becomes dominant and how long a bloom lasts. Ecology truly is a complex branch of science!

I first observed the bloom at Devil’s Lake on November 3rd when I was conducting routine limnological sampling for the Wisconsin Department of Natural Resources (WDNR).  On that date, I noted a species of small round colonies of cyanobacteria  growing throughout much of the water column in the middle of the lake.

Water clarity as measured by a Secchi disk was 3.9 meters, or roughly 13 feet, which further indicated that the cyanobacteria colonies were not concentrated at the lake surface.  However, two days later, the cyanobacteria had floated to the surface and blown downwind accumulating along the north shoreline. (Editor’s Note: See photo at the top of this article.)

This bloom at Devil’s Lake persisted throughout November.  Because of concerns about its repeated appearance along the north shoreline – although nobody was swimming in the cold water – I was asked to return on December 1st to collect a near-shore sample of the bloom for species identification and toxin testing at the Wisconsin State Laboratory of Hygiene.  However, on that date, prevailing winds from the north had pushed the algae away from the north shoreline (where the water was crystal clear) and caused the bloom to concentrate within 10 feet of the south shoreline so I had to head to the other side of the lake to get a sample.

Lab results the next day indicated two cyanobacteria species comprised the bloom. While these species have the potential to produce harmful toxins, results of the lab’s chemical testing produced later found no evidence of the most common neurotoxins in the bloom sample and the most common liver toxin (microcystin) was barely detected and was well below Environmental Protection Agency advisory limits for swimming.  While toxin concentrations of health concern were not found in this fall bloom sample at Devil’s Lake, cyanobacterial blooms in all waters at all times should be avoided by humans and their pets as a general precaution.

Cyanobacteria normally bloom in the warmer summer months in eutrophic (fertile) lakes and can produce toxins of public health concern.  Occasionally in some years these blooms can linger after summer or develop in fall.  Limnologists don’t have definitive answers for why cyanobacteria persist in fall in some years but not others, but one possible reason is that extended warm weather (such as what we saw this year) maintains favorable growth conditions.  It also is a time in deeper fertile lakes where high concentrations of phosphorus and nitrogen that have built up in their colder bottom waters start enriching surface waters as the lakes begin to cool at the surface and their waters mix to deeper depths.  Thus, a persisting bloom has plenty of nutrients to grow.

It’s hard to predict the fate of a cyanobacteria bloom. Some disperse as quickly as they pop up if the wind mixes them back into the water column or they get blown to another shore – but they are still thriving in the water.

In fall, especially as we head into winter, many blooms simply disappear in the cold, low-light waters under the ice of lakes. But, on rare occasions, cyanobacteria have been observed to persist into the next spring and beyond.  One of the most impressive blooms in Lake Mendota occurred in the summer of 1990.  This bloom was prevalent in the fall of 1989, and even carried through the winter under the ice and dominated the following spring!