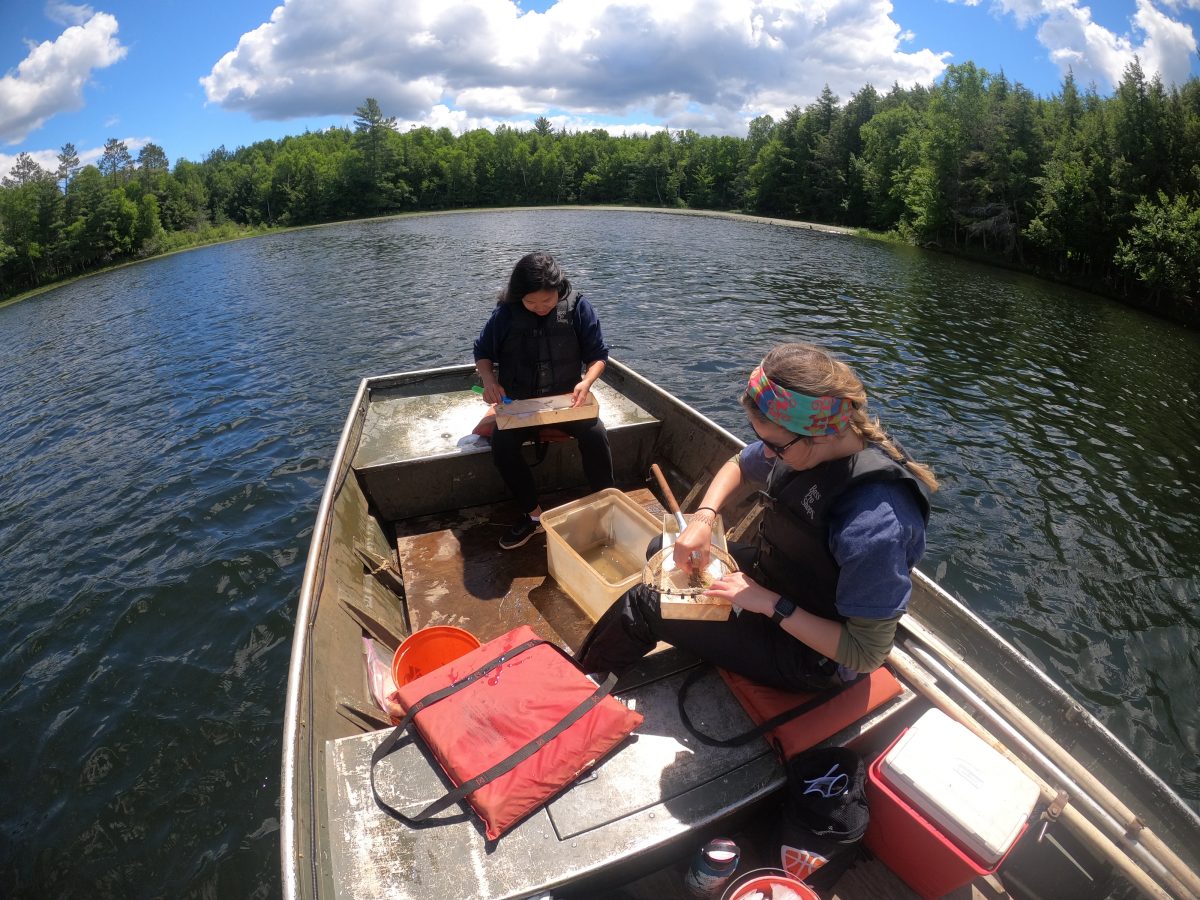 by Cassie Gauthier – When Kailee Berge arrived at Trout Lake Station at the beginning of this summer, she was nervous and a little overwhelmed about all of the new experiences. She grew up in the Milwaukee area and was pretty unfamiliar with the idea of spending free time out on lakes fishing, or swimming, or hiking around the shore.

However, new ways to spend her free time was just the beginning. For Kailee, who will be a junior at UW-Madison this fall, this summer was her first experience with scientific field work, so everything about the job was brand new.

Kailee spent her summer working for what folks on station call the “Bass/Walleye Crew,” which meant she spent her summer with Holly Embke, a Center for Limnology Ph.D. student and lead researcher on the project, and Olivia Nyffeler, the project’s technician. This is the bass/walleye crew’s fifth year working on a whole-lake experiment at McDermott Lake. What they want to know is, if they remove bluegill, sunfish, crappie and bass – a group of fish known as centrarchids – from the lake, will walleye populations increase?

There were a lot of things about fish Kailee didn’t know but had to figure out quickly in the field. “I had to learn how to hold fish, they are so squirmy,” Kailee says. “The first time I tried to measure a fish it felt like it took me ten minutes to get one still enough to do so.”

Similarly, Kailee struggled with some of their equipment the first time she tried to use it. To empty the traps they use to catch fish, the trap has to be hauled into the boat and the crew member has to then wiggle it around and tap on it until all of the fish come out of a single hole in the middle. “The first time I tried to pull a trap into the boat I felt like I was falling over. It was awkward to hold because it is big and pretty heavy,” Kailee says.

Beyond field work, Kailee also learned a lot about lake ecology. She learned the reason they are removing centrarchid species of fish from the lake is because they compete with walleye for the same food sources. Removing these fish may help walleye populations grow because there will be more food for the walleye to eat.

The crew has also noticed a lot more snails in their traps in McDermott Lake this year. Bass and sunfish feed on snails and with the fish being removed from the lake, snails have lost a key predator. Kailee mentioned that the removal of these fish from the lake is most likely affecting other plant and animal species in ways they have not yet studied.

“I love the idea of manipulating an entire lake ecosystem,” Kailee says. In classes we always focus on observing what is already happening in an ecosystem and it is super cool to make observations on what happens while we are actively changing it in McDermott Lake.”

She loves the hands-on learning she got this summer about the way everything in a lake is connected and thinks it is really cool how this project has shown that changing just one thing about a lake really can change everything else within – and around – it as well.

Although Kailee felt awkward and uncomfortable trying to hold fish and pull up the fish traps for her first week or two on station, she now acts and talks like a veteran field researcher. She now shouts out the names of fish confidently, measures them quickly, and throws traps almost effortlessly back into the water. And, when she is talking about her project back on station, she explains it clearly, with a passion that shows how much she has learned and how much she has loved learning during her first summer at Trout Lake Station.