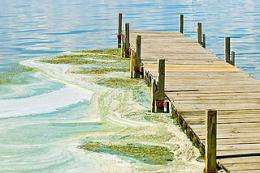 Harmful algal blooms often seem to spring up out of nowhere, forcing public health officials scrambling to issue water quality advisories, while people headed out to recreate on a lake, river or reservoir are met with green water and beach closure signs. Then, just as quickly, a bloom can subside – leaving behind clear water and little evidence it was ever there.

While these blooms may be short-lived, says Grace Wilkinson, a assistant professor at the University of Wisconsin-Madison’s Center for Limnology, the toxins they produce can linger long after the initial bloom and travel far beyond the original location.

“The impact [an algal toxin] is going to have doesn’t stop after production or when we measure its concentration in the water column,” Wilkinson says, “If we’re not thinking about its fate and where it’s going, we can miss a big part of the picture that could have consequences for exposure risks for humans and wildlife.”

In many cases, the end of a bloom is just the beginning of the story for the toxins it leaves behind.

Wilkinson is co-author of a report published December 22nd in the journal, Limnology and Oceanography Letters that reviewed the scientific literature about microcystin, one of the predominant toxins produced by harmful algae or, more accurately, cyanobacteria in freshwater systems. Microcystin is a known hepatotoxin – toxic to the liver – and “because [it] can affect wildlife and humans and livestock, a lot of research from a lot of different scientific fields is being done,” Wilkinson says, which allowed her and graduate student, Quin Shingai, currently at Dartmouth University to  “survey across these different bodies of literature at what is known about how microcystin is moving through the environment.”

What they found was a very complex cycle. After a cyanobacteria bloom starts producing microcystin, there are a number of potential fates awaiting the toxin.

Many of these fates are fairly obvious. For example, the report reviewed studies on how some microcystin breaks down due to exposure to sunlight or chemical or biological processes, while other pools of the toxin end up being “exported” out of the system as they wash downstream.

But, says Wilkinson, there are also a number of “cryptic pathways” that lead to potential exposure risks for humans, wildlife, pets and livestock.

For example, it is quite common for aquatic plants to absorb, or “take up” microcystin during a bloom. In some cases, this is good news, as some plants have the ability to process the toxin and remove it from the environment. But, in other cases, aquatic plants simply become a “reservoir” for microcystin, passing it off to the animals that eat them or holding onto the toxin until they die and decompose, which results, Wilkinson says, in a “delayed release” of the toxin back into the environment.

There is also research that shows that some microcystin can become aerosolized due to decomposing blooms and churning waves, which sends the toxin airborne and, as some studies have shown, into the nasal passages of nearshore residents.

The report also found that there could be huge variation in the concentrations of microcystin in an ecosystem. Whether the toxin was found stored in the sediments of the lakebed or in tissue samples of the fish, reptiles and birds that ate microcystin-laced aquatic plants or insects, Wilkinson says she was struck by how the concentrations of the toxin could vary by orders of magnitude – with some organisms having toxin concentrations tens, hundreds, even thousands of times higher than others.

Wilkinson likens findings like these to “breadcrumbs” creating intriguing trails towards areas of future research as scientists work to more fully understand the microcystin cycle.

“The ecological work of drawing a boundary around a system and looking at all of the arrows of how microcystin moves in and out and all of the cycling in the middle is a really useful pursuit,” she says, especially because “you can’t just look at a lake and tell if it’s making microcystin [or other algal toxins] or not.”

The more we understand this “life cycle” of the microcystin produced by harmful algal blooms, the better we’ll be able to understand, predict and manage the risk of being exposed not just to microcystin but to other potentially harmful toxins.

“There’s no reason to think what we’re learning about microcystin … wouldn’t be a framework we could apply to other algal toxins as well,” she says.

The report, “Microcystin as a biogeochemical cycle: Pools, fluxes, and fates of the cyanotoxin in inland waters,’

can be found here.