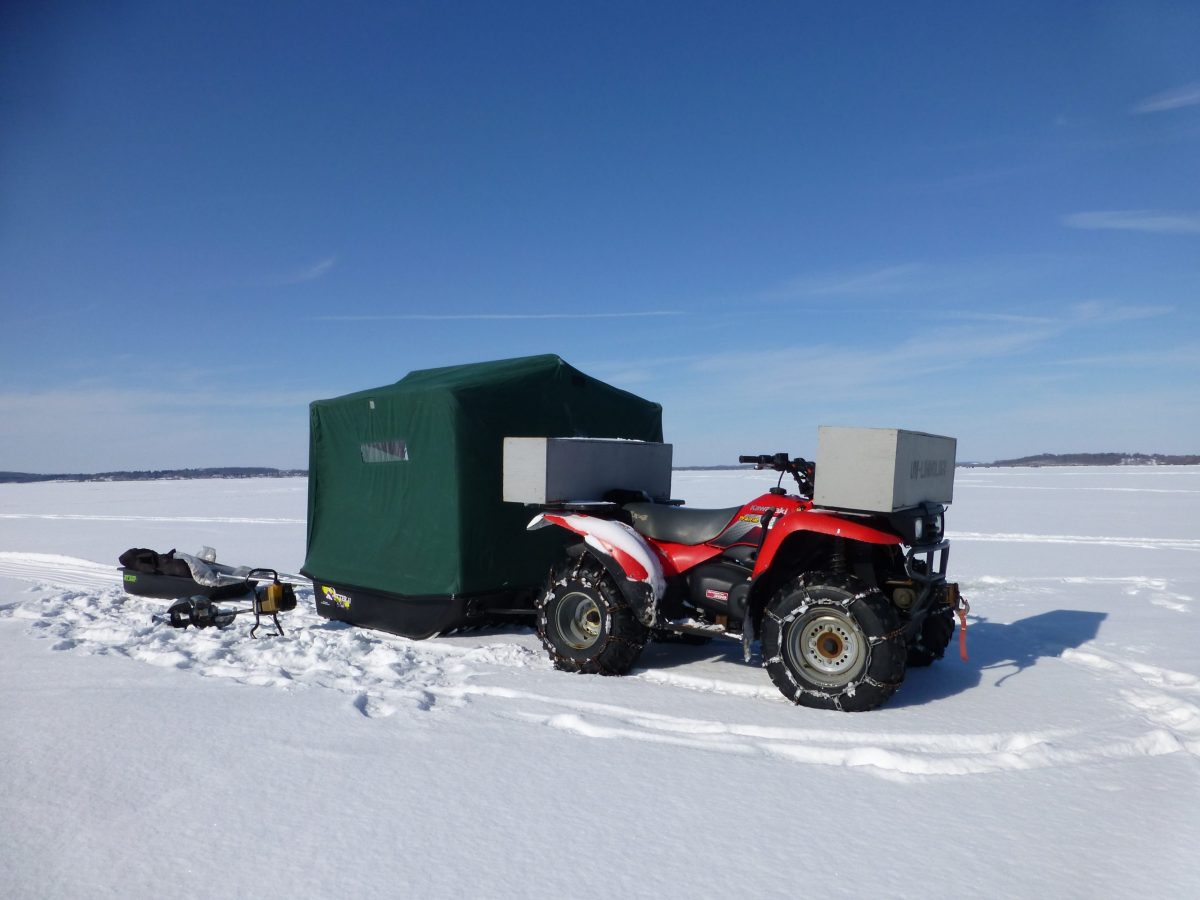 As March gives way to April, spring is springing throughout Wisconsin. Boats are again braving the waves of lakes down south, while ice is slowly melting away in the half-frozen lakes of the Northwoods. As we all shelter in place, awaiting an end to this horrible pandemic, a lone sentinel sits atop the slushy ice of a bog north of Minocqua. Soon, Center for Limnology researchers hope, it will capture an important moment in time.

Every year, when lakes thaw from their winter cover and return to their liquid state, they release a big burst of gases like carbon dioxide and methane, which were by-products of the life that was still going on under the ice.

Out on South Sparkling Bog, just west of highway 51, a collection of scientific instruments called an “eddy covariance flux tower” sits perched atop a buoy. As the ice melts away, the tower will settle into the water and let researchers in Hilary Dugan’s lab at the CFL observe what’s released into the atmosphere, giving us a better sense of the contributions small bodies of water, like bogs, make to our greenhouse gas budget.

But that’s not all that these scientists hope to learn from South Sparkling Bog. Way back in a time when we could go out in groups (also called February), Emily Whitaker and Adrianna Gorsky, two graduate students at the CFL, headed up to South Sparkling Bog with a team of undergraduate field technicians to collect samples as part of a season-long experiment on the bog.

The idea was relatively straightforward. As climate change results in warmer winters in the Midwest, that means changing ice conditions on frozen lakes. For example, less snowfall would mean less snow cover on a frozen lake’s surface, which means more sunlight could shine through the ice and filter down into the water column.

What, our researchers wondered, would that do to the water chemistry and biological processes and, well, all of the things going on under the ice?

To find out, they devised a cool winter experiment. After every snowfall, they would plow the surface of South Sparkling Bog, while leaving nearby Trout Bog untouched as the experiment’s control. Then they would collect data on what was happening in the water below the ice on both bogs throughout the winter.

On a beautifully mild and sunny February day, the team headed out to South Sparkling Bog on the CFL’s coolest new piece of equipment, an amphibious all-terrain vehicle called the Argo. It had snowed the night before, so the bog hadn’t yet been plowed, but was still due for some data collection.

Adrianna and her crew quickly unloaded the Argo and set up a pop-up ice fishing tent. In the tent, Adrianna explained, she was “collecting dissolved gas concentrations of carbon dioxide, methane and nitrous oxide at four different depths within the water column.”

For her part of the study, Adrianna is investigating how winters with decreased snow cover will impact greenhouse gas emissions from lakes and bogs. “In general, north temperate lakes can be large sources of atmospheric greenhouse gases,” she says. While the flux tower will let her capture the big burst of gases in spring, she’s curious to know what’s going on all winter long.

As Adrianna worked to capture a snapshot of the gases produced by South Sparkling Bog, Emily’s crew drilled a few more holes in the ice and spread out across the surface of the bog. Some worked at taking ice cores, which preserve a record of how the ice froze over the winter. For example, the bottom of the core is stained from “all of the dissolved organic matter and tannins” that give bogs their traditional brownish hue, Emily says.

Meanwhile, other members of Emily’s team were measuring light levels below the surface of the ice, using plankton nets to see what kinds of tiny aquatic plants and animals thrive in the water column in winter, and getting temperature readings to see if the extra sunlight entering the snow-free surface of South Sparkling Bog results in warmer winter water temperatures.

While the results of all of these readings will have to wait, Emily says that the plowed portion of South Sparkling Bog had markedly more “black ice” this winter than snow-covered Trout Bog, suggesting that more sunlight should be entering the water column and affecting life under the ice.

Anything Emily and Adrianna find will add important contributions to our understanding of lakes in winter. As we’ve written previously on this page, most limnologists view the warmer, open water months as the freshwater science field season. And that means that lakes in winter remain somewhat of a mystery.

This year, however, thanks to the coronavirus, it’s the winter limnologists who were able to get out and gather data. We’re not sure if it’s good news or not, but at least the extension of our social distancing guidelines won’t impact their ability to analyze it!