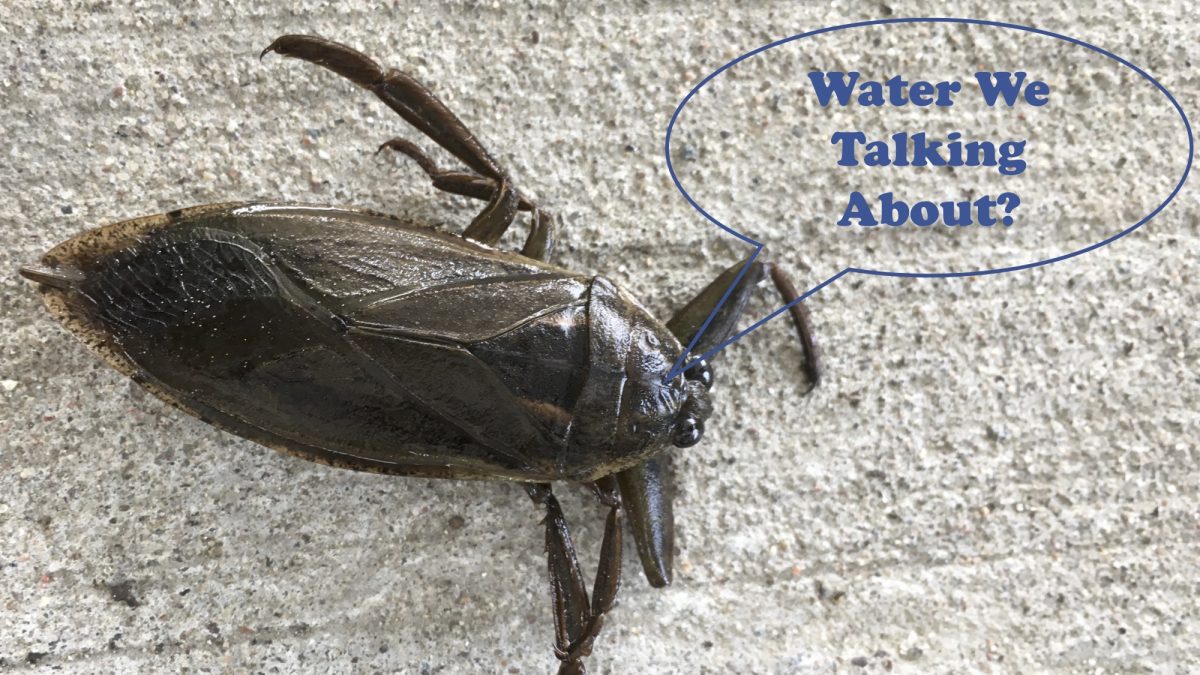 We suddenly live in a world where virtual learning is all the rage. So we decided to launch a new series for our blog as a way to help adults entertain the kids they now find themselves with 24/7. The idea is simple – kids have questions and we find the scientists who can give them an answer.

We’ll let the kids take it from here – homeschool is now in session!

Do we have any freshwater alligator-gar fish, long nose or short nose gar in any of our local waters? Also, do we have planarian? And what is the largest giant water bug you have seen locally?

Hi Nathan. Thanks for being our first-ever “Water We Talking About” contestant! Those are some great questions so here are some (hopefully) great answers!

ReGARding Gar – We sent your question to Solomon David, who was once a researcher splitting his time between the Center for Limnology and the Shedd Aquarium in Chicago. He LOVES primitive fishes and now runs the Gar Lab at Nicholls State University in Louisiana. We’ll get you his answer next week but, for now, the short answer is – Yes! Wisconsin is home to both longnose and shortnose gar. They are pretty rare in northern Wisconsin lakes but they do exist – just check out this picture from the Wisconsin Department of Natural Resources.

Planarians Probably? – Planarians (or flatworms) live all over the world, including here in Wisconsin. In fact, we see them all the time in the aquatic insect samples we collect for our Open Houses. Planarians aren’t insects, of course, but they do like to live in the same kind of habitat as aquatic insects because, well, dead aquatic insects are their favorite food! Sometimes people mistake a planarian for a leech, but if you just look for the sorta diamond-shaped head and the two distinctive eye spots, you can spot a planarian easily. One last fun fact: if you cut a planarian in two – either lengthwise or crosswise – the two halves will grow back into two whole planarians! We’re not sure why anyone would want to do that, but it’s still pretty cool!

The Tale of the Giant Water Bug – Unfortunately, I’m not in the habit of measuring giant water bugs (or Belostomatidae, to scientists) so I can’t tell you the largest one I’ve ever seen. Here in Wisconsin they’re usually about 2 inches long. BUT, I do have a cool story of an unexpected place I’ve seen one. Last May, Center for Limnology director Jake Vander Zanden and I were driving back to Madison from Trout Lake Station (the Center for Limnology’s research station just south of Boulder Junction). We stopped in Wausau at a BP station to get gas. It had been a buggy drive, so we needed to clean our windshield. Jake went to the bucket by the gas pump to grab the window cleaner thing (it’s called a squeegie, maybe?) and, when he plopped it down on the windshield, a giant water bug came with it!

Giant water bugs are notorious for swarming lights at night (in fact, in Florida they are called “electric-light bugs!”) so our best guess is that it was drawn to the lights of the gas station the night before and somehow plopped down into the bucket of window cleaner fluid. Whatever happened, I’ll be a little more careful in the future – you don’t want a giant water bug mistaking your fingers for a meal!

Speaking of meals – have you ever seen this cool video of a giant water bug and its prey?

Thanks for reading! Tune in next week as we hear about the gars of Wisconsin and tackle a tough question from Murray of St. Germain!