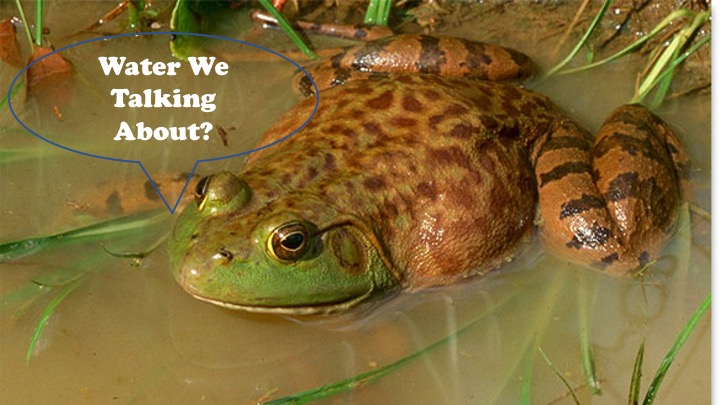 Happy hot and humid Friday! It’s time again for Water We Talking About – when kids send us freshwater-related questions and we track down real-life scientists to answer them. This week, we had to put out an in-house call for questions and our fellow CFLers didn’t disappoint. Alex, the son of Trout Lake Station director, Gretchen Gerrish, found a giant tadpole up in northern Wisconsin – in fact, it already seemed as big as the frog it was destined to become. Which led him to seek out an answer.

Just how big can a bullfrog get? – Alex, Age 9, Woodruff, WI

Thanks for the question Alex! Unfortunately, we weren’t able to track down an amphibian scientist (also called a herpetologist) so you’re not getting these answers straight from a researcher. That said, we did a little digging and, well, it turns out that the American bullfrog is pretty amazing (and BIG!).

To get right to your question, female American bullfrogs are larger than the males and they usually top out at around 6 inches in length (from the tip of their nose to right where their tail used to be) and weigh in at just over one pound. But, it is not all that uncommon to find a bullfrog that is 8 inches and one-and-a-half pounds. To put that in perspective, we found the adorable graphic from National Geographic you see below.

As you can see, the tadpole you found was well on its way toward “teacup” status. It was also likely between 9 months and a year old, although some tadpoles take two years before they complete their metamorphosis into an adult frog.

Whenever that change kicks in, it’s pretty quick, taking fewer than 10 days to become an adult frog once the front legs begin to “sprout.” After that, the average bullfrog spends its adult life in the shallow end of whatever lake, river, stream or pond it inhabits.

The other cool thing we learned about bullfrogs is that their dining habits are, well, kinda crazy! Don’t believe us? A study published in 2013 found, and we quote:

Examination of their stomach contents confirms that bullfrogs eat virtually any organism that can fit into their large mouths, whether it be under water, at the surface, on land, even when it can defend itself with stingers, spines, or claws.

So, you might wonder, what does that mean? It means that, every night,  bullfrogs sit patiently and wait to ambush anything unlucky enough to wander by – from worms and insects, to fish and salamanders, to crayfish, mice, snakes, birds and other bullfrogs!

So….word of warning to anyone reading this who is less than 8 inches tall – don’t go wandering down by the water at night!

If you’re a kid with a question of your own, ask us at hinterthuer@limnology.wisc.edu – @WiscLimnology on Twitter – or our Center for Limnology Facebook Page!