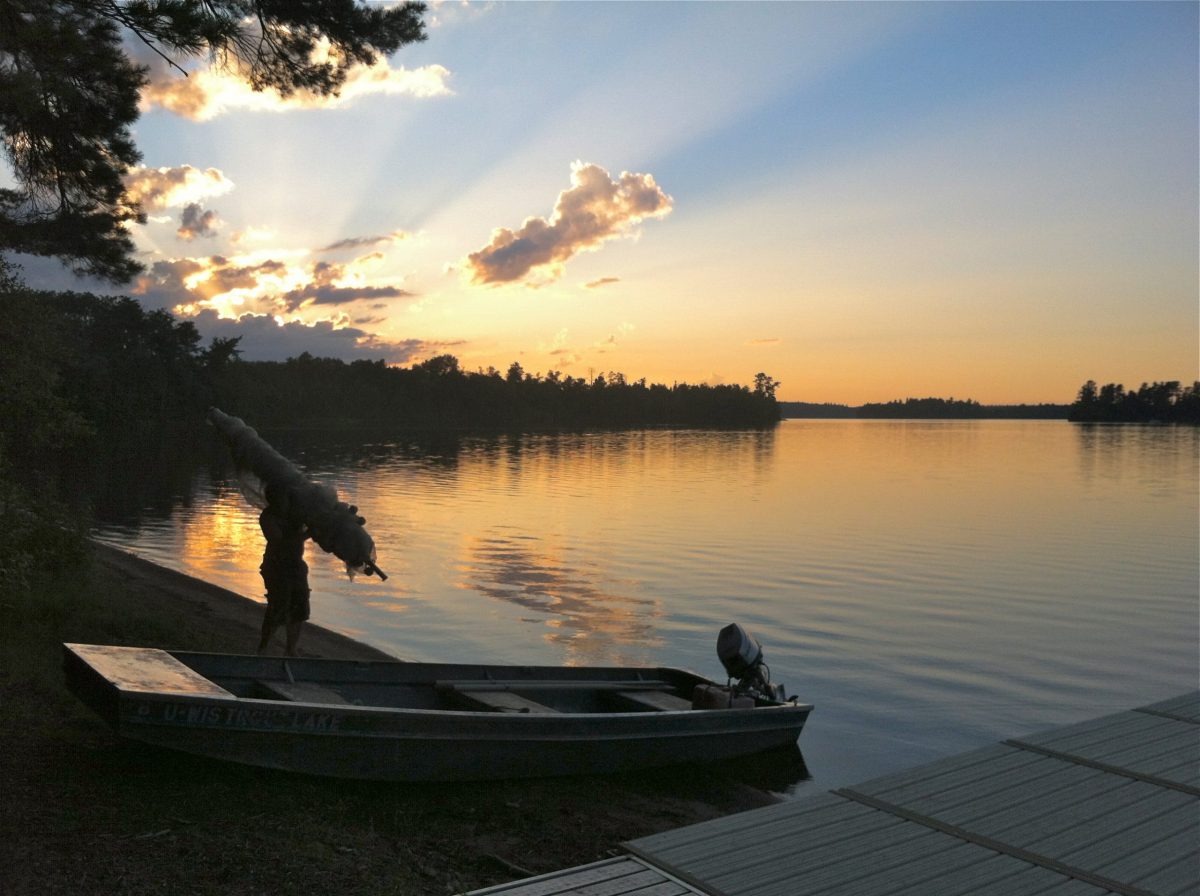 by Cassie Gauthier – If you were to walk around Trout Lake Station on the first week of June most summers, you would find 40 or so people arriving on station for a summer of living in the six cabins, working in the lab, and taking trips to nearby lakes both at day and night to collect data for their various summer research endeavors. Half of those moving in would be new to the station – equally nervous and excited to experience a summer on the beautiful lake and meet their fellow co-workers. The other half would be returning to the station with huge smiles as they embraced friends from previous summers and saw the sight of the unforgettable Trout Lake. The community would consist mainly of undergraduate students, graduate students, and technicians, all greeted with warm welcomes from the year-round staff members as they arrived.

It would be the first week of a life-changing summer for everyone involved.

As this summer approached, Station staff hoped it would begin just as the one described above, but like so many other summer plans, the first week of June at Trout Lake was not the same due, of course, to the coronavirus. However, thanks to station director, Gretchen Gerrish, and the tireless work of other staff, both the long-term research projects that make up a majority of the Trout Lake Station’s funding and multiple graduate student projects are able to be conducted this summer.

Graduate students and technicians who had previously spent time at Trout Lake Station were given permission to once again move into cabins for the summer. But the experience is already proving to be very different from summers past.

This year each cabin is only occupied by a single person. And that person was required to spend their first fourteen days on station in quarantine, without going anywhere in public. Every person was also given a mask to wear when walking around the station for the remainder of the summer and given guidelines to minimize their chance of receiving and spreading COVID-19. These precautions are being taken because Trout Lake Station is working to help protect the health of the Northwoods community of which they are a part.

After their initial fourteen days of quarantine, each person was designated a living and working “research pod.” These pods consist of a few people who are all working on the same research project throughout the summer and are allowed to ride in the same car and boat together to do field work and collect data. Each research pod is still able to use the lab, with a total of five to six people from the station able to work at a time. In addition, research pods are able to spend time together outside of working hours for outdoor leisure and fun activities in the Northwoods.

Many other people are able to be a part of the Trout Lake community this summer virtually, beyond those living on station. Undergraduates and Wisconsin Department of Natural Resources summer interns were able to be hired to help with data analysis and scientific writing. The permanent staff at Trout Lake Station are also telecommuting to work on the days when they don’t need to be using station boats and equipment to do their own field work.

The weekly seminar for everyone who is a part of the Trout Lake community has been moved to an online format as well, which has given a great opportunity for a broader community of listeners to participate. In particular, it has allowed for a lot of scientists at the Center for Limnology in Madison to be a part of the seminars, when they were not able to in past years because of the travel distance.

I asked two current researchers at Trout Lake Station, Kevin Gauthier (my brother) and Quinn Smith, who have both lived at Trout Lake for the past few summers to give their own perspectives of this summer due to the restrictions from coronavirus.

“We are still working hard at conducting research this summer and are just as dedicated,” said Kevin, a recent UW-Madison graduate, who returned to Trout Lake Station for his fourth summer. “However, there are inevitable difficulties of doing field research that have been hard when you can’t talk to other people about it to get their thoughts or ideas. It is almost a completely independent research experience, which would really never be the case otherwise.”

This year the overall atmosphere on station just feels different, he says. “You don’t have a whole community of people to unwind with at the end of day. But even if the community is a lot smaller than a normal summer, it is still strong and conducive to promoting good mental health and productivity.”

Quinn, a graduate student at the University of Minnesota-Duluth, who is spending his third consecutive summer at Trout Lake Station gave a similar positive perspective, “The station hasn’t been the bustling hive of personnel like previous years. However, at its core, [it] remains committed to scientific progress and community. Although physically smaller than past years, the community this year is as, if not more, supportive in terms of individual mental health and scientific projects here in the Northwoods. The community here at Trout Lake Station is working together to help everyone achieve their goals while being safe and mindful of proper precautions. If there was a time to help others with their projects, this summer would be that time, and the community here is striving to support each other and continue traditions from years past.”

Sitting in on the first few seminars of the 2020 “COVID” summer myself and connecting with my mentors has ensured me that this summer will still be one that is full of long days of field work on lakes, learning about new findings, and building a strong community engaged in science. I have been encouraged by all of the smiles and excitement I have seen on my computer screen thus far and look forward to sharing about each research pod’s adventures throughout the summer. Stay tuned!