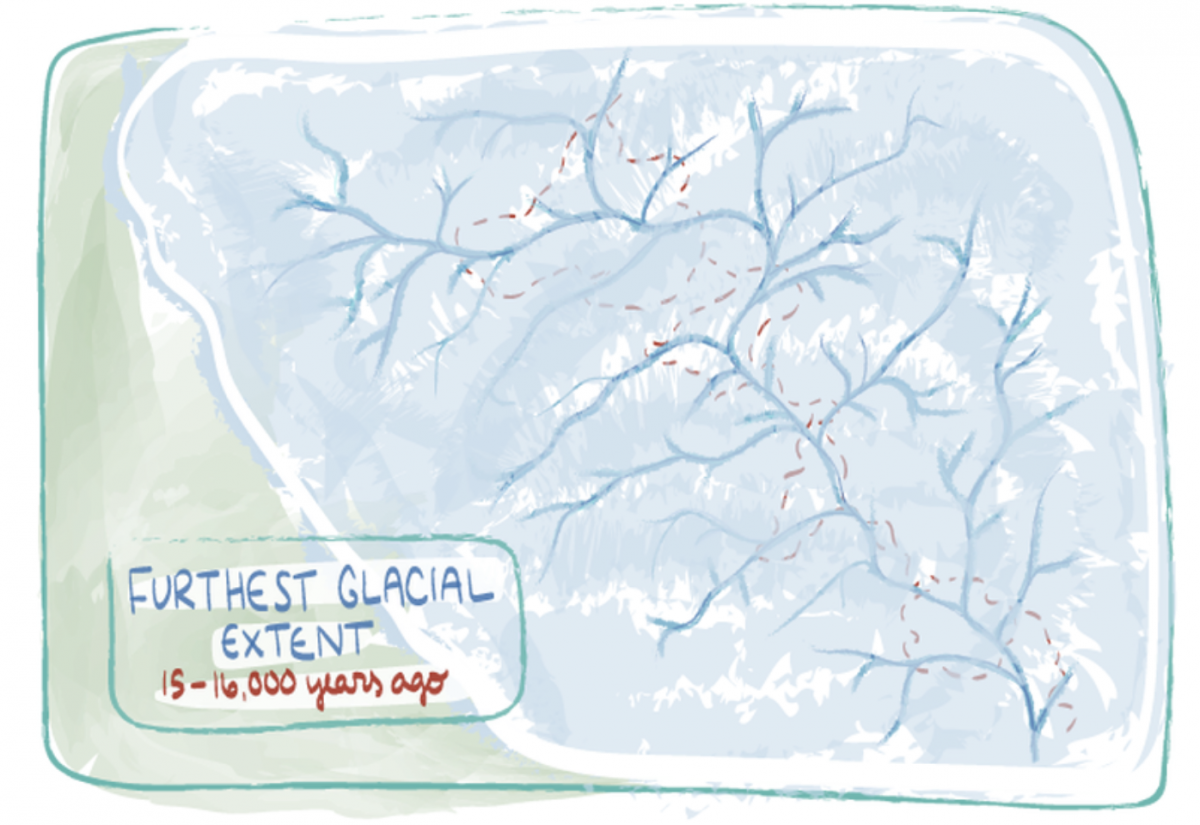 Holding History, a UW-Madison-based project, helps students explore how cultural knowledge is made and preserved and share what they learn with broader audiences. Their series, Water Lines, is produced by 2019 Trout Lake Station summer student, Julia Buskirk.

Story and images by Julia Buskirk

A lot of Lake Mendota’s drastic changes have occurred in the last two and a half centuries, after European colonizers first started displacing the indigenous Ho-Chunk people and settling this area. Around Mendota and around the globe, colonization by European powers has led to drastic environmental changes at an unprecedented rate in human history. But in order to understand how quickly change has been occurring in the last few generations, I want to give us perspective with the story of Lake Mendota’s formation, a much (much) slower saga. By understanding how long it took glaciers to sculpt this land, I hope we can realize how quickly it’s been changing at the hands of humans.

The story starts about 31,500 years ago. This marks the moment when the Laurentide Ice Sheet first began to creep its way into Wisconsin. Starting in the northwest corner, ice slowly plowed across the state over the next several thousand years, flattening the land, picking up and dropping off rocks, scraping off hilltops and depositing them in new locations.

It would be tens of thousands of years before the Laurentide reached the Yahara watershed, where Mendota sits as the first or fourth lake in south central Wisconsin. Before the ice came, the area we know as Dejope looked a lot different. Instead of the four familiar lakes, you would have come across a network of streams, carving their way through hills twice as tall as we know them to be today.

This was because the dominant rock type in the area is sedimentary, a remnant from when Wisconsin was still covered by a sea nearly 400 million years ago. Sediment from eroded rocks settled out in these ancient waters, forming layers of sedimentary rock exposed when this sea finally receded. Since water can easily cut through sedimentary rock, streams sculpted and carved hills out of them as water cut their way through. But when the Laurentide Ice Sheet finally reached the Yahara area, ice plowed into these hilltops, leveling their heights and altering the water’s pathways.

If you drive about thirty minutes west of Madison, you can get a look into the Yahara Watershed’s past. This west section of the state escaped the grasp of the Laurentide ice sheet and held onto its hilly origins. Since this area was never touched by the glacier, there was no glacial drift, the name given to the conglomeration of rocks that glaciers leave behind. Because of this, the southwest part of Wisconsin is called the Driftless Area.

About 15-16,000 years ago, the Laurentide pushed just 10 miles past the Yahara watershed before the changing climate caused the ice sheet to melt and permanently recede. The ice sheet did not leave without parting gifts, though. Laurentide dropped hills, called drumlins, of rock that had been accumulated and frozen inside of its icy grasp. These hills still surround Mendota and the rest of Dejope to this day. The famous Bascom Hill at the University of Wisconsin is actually one of these drumlin hills left behind by this glacier.

After the last of the Laurentide receded from this area, glacial drift blocked the flow of the original streams. This area swelled with melting glacial water, which flooded to form Glacial Lake Yahara. At this time, Dejope was not four lakes but one. Over the next several thousand years, the water wore away at the rocks that the glacier left behind, eventually finding a way through. The single Glacial Lake Yahara drained, eventually settling into the familiar shapes of the four lakes we see today.

It’s thought that the first people to arrive in this area did so after this last glacier. Their future generations would be the ones to build the highest density of effigy mounds in North America, right here around Four Lakes and southwestern Wisconsin. My next blog post will delve into these extraordinary structures and the people behind them. Effigy mounds mark the first touch of human alteration to this landscape, a hint of what would come.