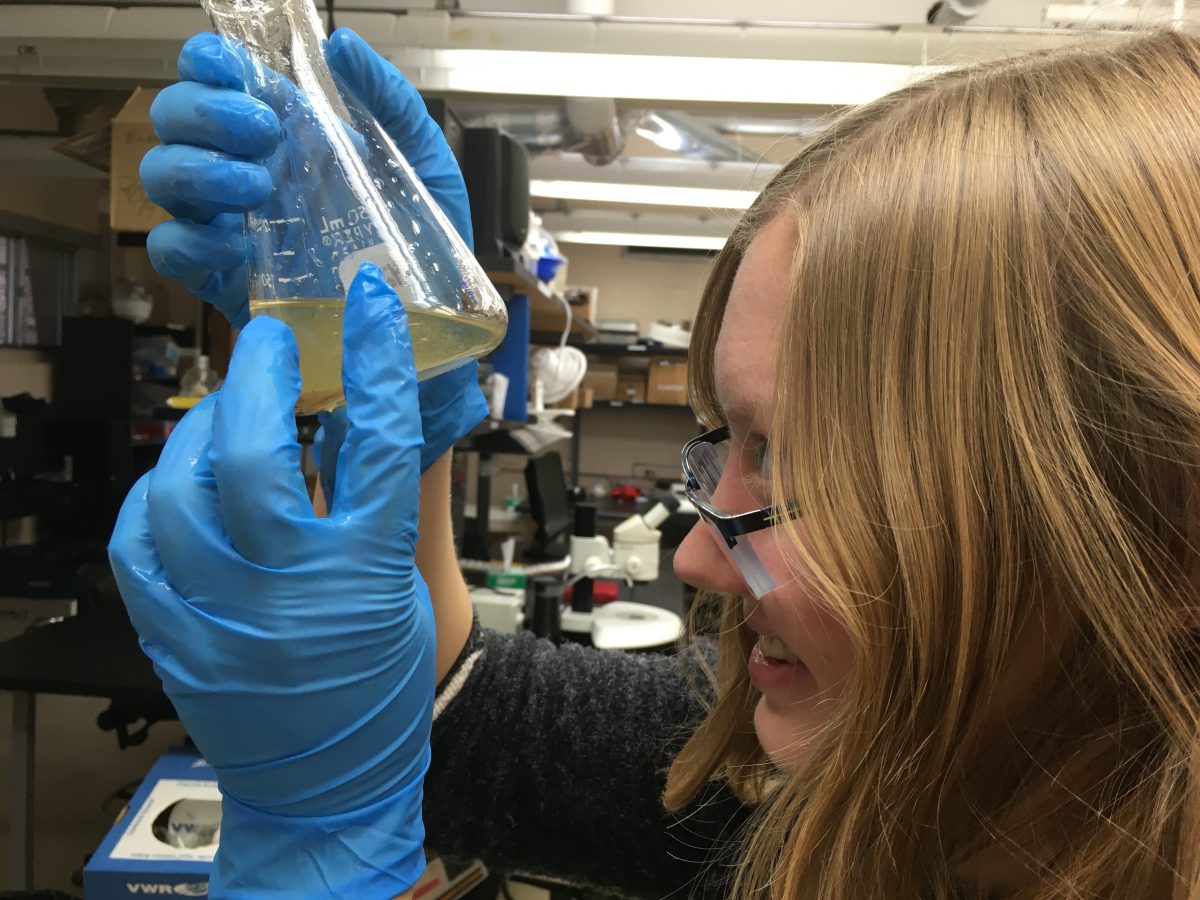 Back in March of this year, just as it was becoming clear that “business as usual” was about to be a thing of the past, Petra Wakker walked into Room 101 of Hasler Lab and walked out with a high-powered compound microscope. No, it wasn’t a random act of scientific espionage, it was a carefully orchestrated loan of essential equipment during unprecedented times. Since she wasn’t going to be allowed on the soon-to-be-shutdown UW campus, then Petra, a CFL research technician, would quite literally bring her work home with her.

While March may seem like eons ago in this weird, weird year we’re having, Petra’s research dates even further back. Centuries back, in fact – way down in the muck at the bottom of Lake Mendota.

You see, the bottom of a lake is a lot like a time capsule. Each year, a layer of sediment is deposited on the lake floor and, the following year, another thin layer settles on top. Much of what’s in those sediments, as well as other things in the lake that drift down into its deepest levels, gets preserved in these layers of silt. The further down into the muck you go, the further back in time.

The field of study is called “paleolimnology” and researchers have used it to explore things like what plants were around long ago by examining grains of pollen in deep lake sediments, or to document Midwestern lakes’ conversion from sandy bottoms to silt and muck as European settlers tilled up the land to plant crops – inadvertently causing erosion of topsoil into our waterways.

Petra’s target, however, isn’t grains of pollen or particles of soil. She’s hunting for heads. Or, more accurately, head capsules.

The study, Petra explains, is looking for the head capsules of an insect known as a midge, or lake fly. “Midges are the swarms of flies along the lakeshore in early to midsummer,” Petra says. “They look like mosquitos, but they don’t bite, and they’re an important part of the food web and food source for fish.”

Before those midges emerge in large swarms, they have a different life stage – one of a larvae that can live for up to a year in the lake. That’s where the head capsules come in. When a midge gets to emerge as a flying insect, it breaks out of its larval exoskeleton and, much like a cicada, casts that remnant of its previous life stage aside.

“Think of the head capsule like a skull on the outside of the head, except that the bones are made of chitin (a protien similar to the keratin in our hair and fingernails),” Petra says.

Those cast-offs drift down into the lake sediment, where some are scooped up in sediment cores and a few of those end up emerging as Petra sifts through her samples. Then, she gets a better look at them with her on-loan microscope, so that she can ID what species she’s working with.

“Though it can be heard to tell, midges are not all the same,” Petra says. “Midges are highly diverse, occupying many different habitats in a lake, from nearshore plant communities to the deep, anoxic mud. This means that the particular community of midges can give us a lot of information about what conditions were like in a lake [long ago].”

Researchers at the Center for Limnology have studied the midges in Mendota before, and found large historical changes in the populations of midges, especially in the 1950’s. From these and other studies we know that midges respond in fairly predictable ways to changes in water quality in lakes. Her study is different, Petra says, in that it enabled her team to look back further in time than any “real-time” information that’s been recorded about Lake Mendota. By obtaining samples from several different layers of the sediment, she says, it provides a “snapshot” of not just what midge communities looked like hundreds of years ago, but how things have changed between then and now.

The idea, Petra says, is to better “understand what the lake was like before Madison was built up around it. This will help to interpret what is happening in our lake now by understanding the baseline conditions, or what the lake would look like without human influences.”

Petra is leaving Madison soon to pursue her Ph.D at Yale, so we wish her happy (head) hunting and can’t wait to hear what she finds!