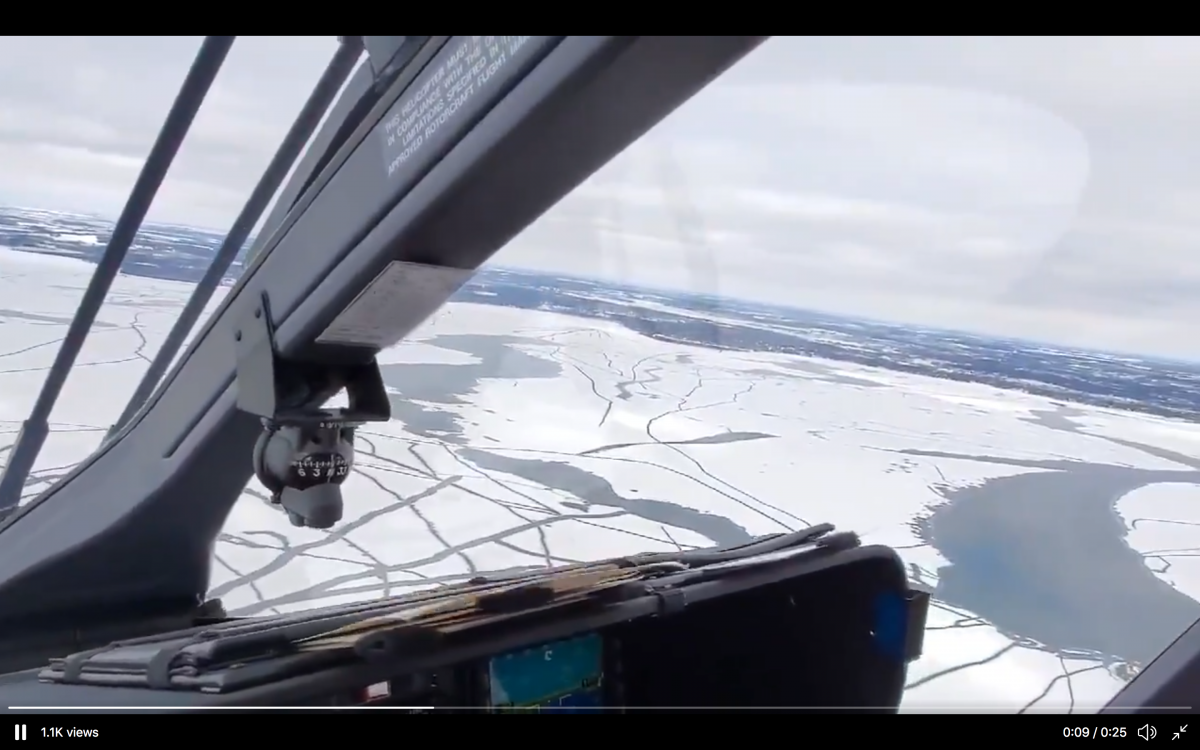 This weekend, the Center for Limnology Twitter account was tagged in a post from the UW Department of Emergency Medicine’s chief flight physician and pilot, Mike Abernethy, who had been flying a helicopter over Lake Mendota on Saturday, January 9th. It’s a really cool view of the lake and you should watch it here.

While Abernethy reports “about 95%” ice cover on the lake, a few large spots of open water are clearly visible, leading to a fairly obvious question – with open water still visible on January 9th, how in the world was Lake Mendota declared “frozen” on January 3rd?

You see, the tradition of monitoring Madison lakes for their annual freeze and thaw dates goes back 165 years. In fact, it’s one of the longest continuous ice datasets in the world. People probably began keeping records because, at the time, ice was a serious business. Before refrigeration entered the picture, folks living in warmer climates had to keep things cool in their icebox. And the ice in that ice box had to come from somewhere that got cold enough to make it.

That’s why, as soon as the lakes in Madison froze over each winter in the early and mid 1800’s, crews headed out on the ice with over-sized saws and ice tongs and pulled cubes of Yahara Lakes ice up on shore. Those cubes were packed in sawdust and sent by rail to southern iceboxes.

But refrigeration wasn’t the only thing that wasn’t yet invented by then either. There were no airplanes, helicopters, satellites, drones or even very tall buildings to give anyone a bird’s eye view of Madison’s lakes. What folks did have was Maple Bluff and Observatory Hill – two high points in the landscape that gave us a decent view of Lake Mendota.

We also had E. A. Birge and Chancey Juday, two early pioneers in limnology who were out on Lake Mendota more often than most. And, legend has it, that they helped play a big role in setting the ground rules for when the lake was dubbed “frozen.”

It wasn’t the most scientific reasoning, but it was the most Wisconsin reasoning – it the pair of researchers could no longer get into their boat and row a case of beer from Picnic Point over to their friends in Maple Bluff, then Lake Mendota was “closed” for the season.  (We assume that, once the ice got thick enough, the beer runs consisted of snowshoes and sleds!)

Anyway, because of this rule, Lake Mendota is often considered frozen before its winter lid of ice has fully formed. And that’s why, every year, folks at the Wisconsin State Climatology Office spend parts of winter and spring roaming the high points in the Madison landscape with binoculars ready to set “ice on” and “ice off” dates based on this “eyeball test” of ice coverage.

Now, more scientific-minded readers of this blog are probably asking a very good question. Why do we still do it this way? Surely satellites or drones (or Mike Abernethy’s helicopter) could paint a much more accurate picture of ice cover on our lakes. And, yes, they could. But, while such measurements would be more accurate, they might not be as useful.

You see, if we suddenly swapped satellite imagery in for human observation, then it would muddle the amazing dataset we already have. Folks have been setting “ice on” dates for Lake Mendota for 165 years using the “eyeball method” of observing ice cover from Picnic Point to Maple Bluff. If, all of a sudden, we decided that “ice on” only gets called when an aerial observation shows 100% ice cover, such readings wouldn’t tell us much about how ice cover has changed over the century and a half we’ve been calling “ice on” when the lake was only mostly frozen.

There is, of course, a place for these more accurate measurements, but they will likely never fully replace the current methods we’ve passed down through generations. Those 165+ years of observations have documented a profoundly changing lake – one with a month less ice cover, on average, than it used to have each winter.

But they’ve also shown that one thing hasn’t changed. Madison residents are extremely interested in knowing when their lakes freeze!