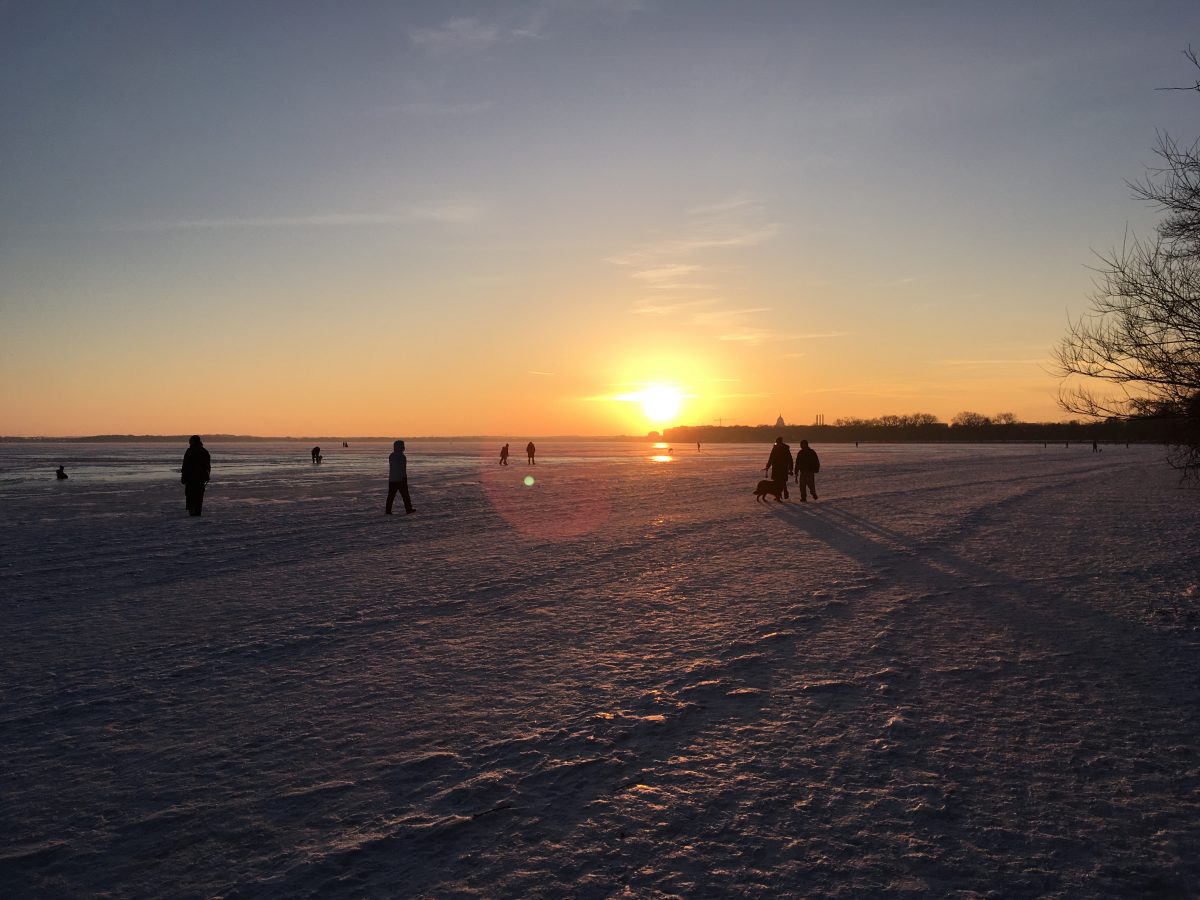 For those of us lucky enough to live where our lakes freeze in the winter, one of the true joys of the season is getting out on the ice. Suddenly, a space that was only available for the boat owners among us becomes available to anyone who lives near its shores. This winter, in particular, has been phenomenal. Relatively mild temperatures and a low amount of snow cover has made walking and skating and fishing on the lake an easy pursuit – no snowshoes required. While cross-country skiers might complain, the rest of us have embraced the ability to be out on our lakes.

In the fall, Wisconsin skies are dotted with geese and cranes and ducks heading south for the winter. But not all of the birds get the memo. Even though Canada geese and Mallards are migratory species, that doesn’t mean every individual joins the flock for a trip to warmer winter locales. Here in Madison, you’ll often find small flocks of geese and ducks congregating wherever there’s open water – all winter long.  The webbed-foot prints above are from Mallards that have been hanging out near Yahara Place Park where the Yahara River flows into Lake Monona and the strong current usually keeps this stretch of water open. It might seem impractical for ducks and geese to stick around but they’re built to withstand cold weather just fine. They’re equipped with the original goose down jackets and their feet are actually remarkable, well, feats, of adaptation. For everything you ever wanted to know about waterfowl feet, read this article from Ducks Unlimited. But, here’s the take-home message. They have evolved a “counter-current circulation” system in which their arteries and veins pass close to each other and exchange heat, keeping their feet above freezing.

If I hadn’t seen the animal that emerged from this crack in the ice, I might have simply passed this pile of mussel shells by. Unfortunately, I wasn’t quick enough to get a picture of the furry, aquatic rodent, but at least it left some evidence behind. It turns out – and this was news to me – that muskrats don’t just eat aquatic vegetation. While they are more commonly associated with marshes and their domed homes of mud and cattail stalks and other aquatic vegetation, muskrats do live in burrows in the banks of just about every water body in Wisconsin (even some agricultural ditches). Some muskrats stockpile enough of their preferred plant diet to get them through the winter but, for those dwelling adjacent to more open-water habitat, that’s not an option as many of the plants living under the water die back in the fall. So they switch things up and add meat to their menu. In fact, researchers have documented muskrats eating everything from mussels to fish, crayfish, insects, snails, frogs and turtles. The pile above is a collection of the large, rounded shells of our native freshwater mussels and the smaller, angular shells of the invasive Zebra mussel. For this particular muskrat, the invasives were preferred – most of the larger shells had been opened but not eaten, while the Zebra mussel shells were picked clean.

Then, of course, we get to homo sapiens, the ice-skating, ice-fishing, ice-recreating species that dominates the shores of Madison’s lakes. Evidence of their lives upon the lakes is obviously far less subtle, but it speaks volumes about the push for Wisconsin’s winter inhabitants to embrace the season and take advantage of conditions when they can. We may think of winter as a time when everything slows down and animals hibernate and plant life fades away, waiting for warmer temperatures. But, if you know where to look, there are signs everywhere of life on ice.