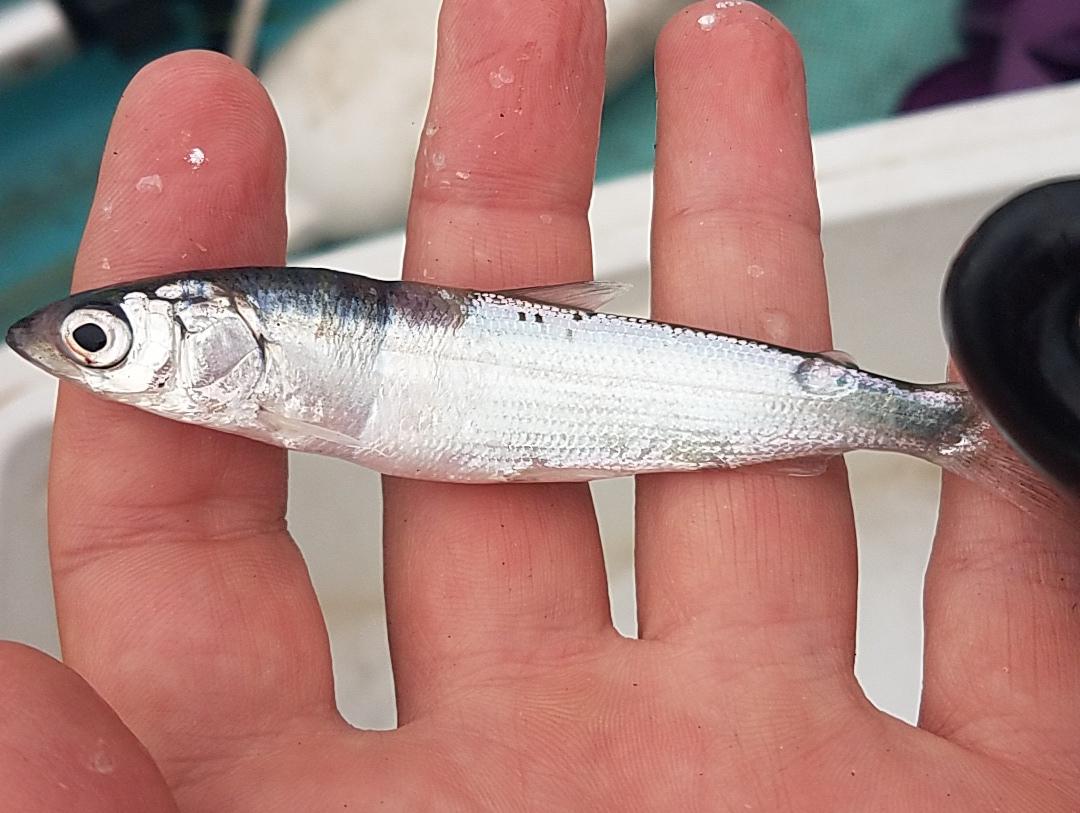 Earlier this summer, Alice Ogden-Nussbaum was checking on a gill net she had set a day earlier in Lake Mendota’s deepest waters. As she rolled the curtain of net up out of the lake, a remarkable, silver-scaled find surfaced – one that made Alice reach for her phone and excitedly text a photo to her colleague, Ted Bier, who oversees fieldwork for the North Temperate Lakes Long-Term Ecological Research project out of the Center for Limnology.

The picture Alice sent was of something Bier had been looking for but never seen in the two decades that he’s been leading these annual surveys of the Madison lakes’ fish populations.

It wasn’t a gigantic northern pike or world-class walleye or jumbo yellow perch. It was a small fish barely the width of Alice’s palm – and it was also a sign that a long-struggling species is not yet gone from our lakes.

Since the 1980’s, populations of a fish called cisco (Coregonus artedi) have plummeted in the Yahara Chain of Lakes. Cisco, also referred to as “lake herring,” range in length anywhere from nine to eighteen inches as adults and weigh between a quarter to one-and-a-half pounds. Historically, these medium-sized forage fish – or prey species- were an important food source for top predators like walleye.

“I was pretty surprised to say the least,” Alice says. In the years she’s been on fish crew, she can count the number of cisco she’s seen on one hand. And those were all larger, adult cisco. This year, however, Alice added seven to that list and, most exciting was the fact that some were small “young of the year” fish, which indicates that those older adults are breeding and some of their young are making it past the earliest – and most uncertain – days of their life cycle.

“Pulling up the small [cisco] which were hatched last year was a complete first for me,” Alice says. “There was certainly a moment of disbelief as we rolled up the net and saw one… and then two more!”

In Lake Mendota, part of the cisco decline was by design – cisco are a voracious predator of a species of zooplankton called Daphnia pulicaria. Daphnia, in turn, are voracious predators of algae. So, in an effort to encourage clearer lakes through more algae-eating daphnia, scientists and resource managers in the 1980’s decided to manages Lake Mendota as a walleye and pike fishery, boosting the kind of fish species that anglers love (and the kind of species that eat cisco). The experiment worked, for a while at least, as fewer cisco meant more daphnia, less algae and clearer waters.

The bigger problem for cisco, though, had nothing to do with the healthy population of their predators. As lakes like those in the Yahara Chain warm due to climate change and struggle with nutrient pollution from agricultural and urban runoff, they are losing two things that cisco need to survive – cold water and oxygen.

A House with Two Rooms

In summer, cold-water fish species like cisco get pulled in different directions. The warm, upper layer of water in Lake Mendota is full of food and oxygen, while the cold, bottom layer of the lake has the “just right” temperature that cisco need to thrive. In between is a middle layer of water called the “metalimnion.”

You can think of it, says Ted Bier, like a house that only has two rooms connected by a hallway. The living room is set at the perfect comfortable temperature, while the kitchen is the only room in the house where you can eat and breathe. The problem is, the kitchen is at hot as an oven. In such a house, the only way to survive is to rush down the hallway into the kitchen to grab a bite and a lungful of oxygen and then retreat back down the hallway to the living room for a quick rest in survivable temperatures before you run out of oxygen and head back to the kitchen.

This is basically how cisco spend their summer.

And, most summers, the metalimnion – or the halfway between the two rooms of their house – is really, really long.

For example, Ted says, in Fish Lake this summer, the warm, oxygenated layer of water went down to five meters but the cold, bottom layer of water and its “just right” temperatures didn’t begin until eight or nine meters. That left about twelve feet of water for a fish to navigate between the two “rooms” of its house.

“Larger fish have the energy stores to move back and forth and they can do it quickly, but little tiny fry (baby fish) can’t navigate that distance and they die,” Ted says. In a typical year for Lake Mendota, this means that, while adult cisco can tolerate these conditions, any young fish they may have produced that year die trying to constantly swim between the upper and lower layers of the lake. Those young fish obviously don’t make it to the next summer, meaning cisco have a hard time growing their population and, Ted worries, eventually when the adult cisco die, no babies will have survived to take their place.

Luckily, Ted says, Lake Mendota stratified slowly this spring. The combination of mild temperatures and little rain kept algae-growing nutrients from flooding into the lake and allowed for a nice, long period called the “clear water phase” when tons and tons of daphnia are spread throughout the lake.

These conditions let newly hatched cisco grow quickly as they had plenty of food to eat and cool temperatures held water conditions at the “just right” setting for several weeks.

Then, when the lake did stratify into its warm upper layer and cold bottom layer, these mild conditions kept the space between them smaller.

“Even now in September,” Ted says, “there’s oxygen down to ten meters and the temperature cisco want is available at eleven or eleven and a half meters.” That means the “hallway” between the two rooms of their house is much smaller than normal. “We had a recipe for a survivable lake at least for one season for cisco fry,” Ted says.

And that gives him hope. It may mean that the next generation of cisco got the conditions they needed to survive their most vulnerable year of life and will be able to deal with less ideal conditions in future summers. It certainly helped ease fears that cisco were on their way to disappearing from Lake Mendota completely.

“I had been under the impression that cisco basically weren’t breeding in Mendota anymore since the conditions aren’t great for how they live their lives,” Alice says. “The nets that we got them in are a relatively small target way out in the deepest part of the lake so I’m hopeful that the fact we managed to catch several cisco out there is an indication that they’re doing well.”