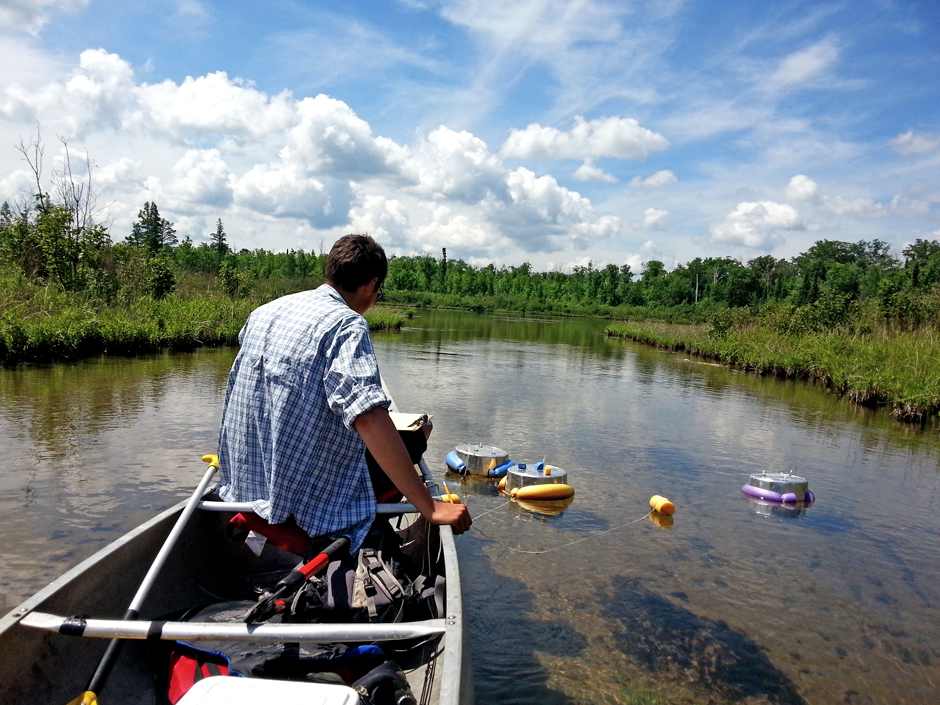 While researchers all over the globe have been studying greenhouse gases, there are still some areas in the field that have not received as much attention as they deserve. Emily Stanley, professor in the department of integrative biology at the University of Wisconsin and principal investigator for North Temperate Lakes Long Term Ecological Research (NTL-LTER), has spent a significant part of her career exploring a few of them.

“Clearly we have a problem with greenhouse gases. What people may not realize is that streams and lakes are hotspots of global methane and CO2. Understanding greenhouse gas dynamics in these systems is important because they are vents all over the world and they are not insignificant,” said Stanley.

North Temperate Lakes Long Term Ecological Research is one of 28 programs around the U.S. and beyond that form a rigorous research network. While many long-term research programs are thought of in terms of two or three years of research, five if they are lucky, the NTL-LTR program has been going since 1981.

“We hope to be going another 40 years,” Stanley said. “We collect biological, chemical, and physical data. This data is influenced by human responses and actions as well…we can’t separate humans from the environment.”

Stanley notes that while humans are not the source of all greenhouse gases, humans have exacerbated greenhouse gas issues. Two significant effects humans have on streams and lakes are: 1) “turning them green,” that is, creating conditions that encourage algal blooms, and 2) building dams. These human effects make emissions worse in terms of methane, the more ephemeral gas, and CO2, the big problem. Some greenhouse dynamics in lakes and streams Stanley and her team have noticed are: big effects of agricultural activities, low gradient landscapes, and topsoil ending up in lakes. While lakes handle nitrates, they produce methane, which bubbles up to the surface of the lake.

“The bubbling, or ebullition, is hard to measure, but it is important because lots of methane leaves lakes that way,” said Stanley. “We will need about 10 to 20 years of that data to get some picture of the real processes and their impact. We are building a global database on these types of processes in streams. The conventional view has been that there’s not much methane in lakes and streams, but we already know with the data we have that that is not true.”

In addition to getting a handle on the methane and CO2 impact of lakes and streams, North Temperate Lakes Long Term Ecological Research has some overarching goals. Some goals are: to understand how the lakes work short and long term, what factors affect their ecology, and to what degree each factor has ecological influence. NTL-LTER is also designed to be a source of information for policymakers. It is also training the next generation of aquatic scientists and interacting with the general public. A NTL-LTER program called “Schoolyard LTER” teaches 3rd and 7th graders about area lakes. Open houses, lake trips for schools, and environmental training such as plankton sampling are all done by NTL-LTER.

Data collection is a fundamental activity for North Temperate Lakes Long Term Ecological Research, as is sharing data. Lake core sampling is performed every couple of weeks, with the exception of winter, where lake core samples are collected monthly. Recently, high-frequency data collected by instrumented buoys has become a valuable research resource as well. Core lake data stretches back to the early 1800s. Routine limnological data is taken.

The NTL-LTER contains 11 study lakes, but many other lakes have been included in their research efforts. Whether these lakes are a good representation of regional patterns is a topic that is being explored. Four southern lakes are also being studied, and one of the lakes, Lake Mendota, is considered the “best-studied lake in the world,” said Stanley, as the university is right on the lake. Data goes back to the early 20th century. Sampling is seasonal.

NTL-LTER has made some interesting, sometimes surprising observations.

“People have said of us, ‘You were in the right place at the right time,” Stanley recalled. “I think we are in the right place all the time,” Stanley noted. She mentioned, as an example, their strategy of placing data gathering devices under ice, which led to their observation that water starts stratifying before ice appears. “That’s not what the textbooks said,” elaborated Stanley. Another observation they have made due to their unique research setup is that groundwater levels in the area are rising, with new ponds showing up. They have especially seen this trend over the past five years.

“We know people who have had to abandon their lake houses,” Stanley said. Despite the striking nature of this change, the cause is not yet clear, but a current hypothesis being considered focuses on land use. “What we are seeing could be a slow land response to usage change from prairies to agriculture,” Stanley noted.

Ultimately, the NTL-LTER has two main goals in researching greenhouse gas dynamics in lakes and streams: 1) building a data set for use as a data resource for the scientific community and, in collaboration with colleagues at Yale, to generate a reliable global estimate of methane emissions from world streams and rivers; and 2) to study aquatic gas dynamics as a means of understanding overall processes of lakes and streams. “We want to use methane as lens for viewing these ecosystems,” Stanley said.

“Methane is such an interesting gas, which is something I became aware of when I was a postdoc studying wetlands, and my advisor was doing a methane project. I also had a chance to return to this topic through two of my graduate students who studied carbon dioxide and methane in streams as part of a collaboration with the USGS,” she noted.

In summary, Stanley plans on continuing methane research and gaining more knowledge of how greenhouse gas processes function in lakes and streams. She concluded, “The incredible importance of having long term research can’t be overstated. Understanding can only be gained over a long time scale. Too often, people think in terms of only one to three years. Being able to be in the right place all the time, as we have with NTL-LTER, makes it possible to actually get a grasp of real changes.”