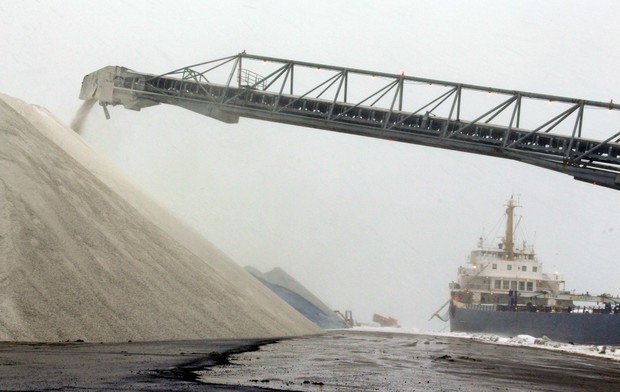 Tourist towns along the Lake Michigan shoreline love to proclaim the giant body of water “Unsalted and Shark-Free.” The slogan is plastered on t-shirts, magnets and bumper stickers but, according to a study published December 15th in the journal, Limnology and Oceanography Letters, only one of those claims holds water.

Combined, the Great Lakes make up about 20% of all of the available fresh surface water in the world. While it’s true that sharks aren’t swimming through that vast reservoir, the lakes aren’t as fresh as they used to be. Over the last 200 years, thanks primarily to the use of road salt to keep winter roads and surfaces ice-free, the freshwater of the Great Lakes has seen salinity levels creep steadily upward.

While other studies have shown increasing salinity levels in smaller bodies of water, “we know big lakes aren’t immune to human pollution,” says Hilary Dugan, an associate professor at the University of Wisconsin-Madison’s Center for Limnology and lead author of the study.

Dugan and her team used a combination of current and historic water quality data and computer models to analyze the amount of salt being carried into Lake Michigan by 234 different tributaries, from major rivers to tiny streams.

Their research revealed that these tributaries bring a little more than one million metric tons of chloride – an element indicating the presence of salt – into Lake Michigan each year.  Where the lake’s salinity level used to sit at about one to two milligrams of chloride per liter of water in the 1800s, today’s levels are now closer to fifteen, with nearly half that increase occurring in only the last 40 years. And, Dugan, says, if business continues as usual, Lake Michigan can expect to see an increase of one milligram of chloride per liter every two to three years.

While those amounts don’t approach the 250 or so milligrams per liter that are known to harm freshwater plants and animals and taint drinking water supplies, any increase in salinity can be problematic.

“The things living in these lakes evolved to thrive in freshwater conditions, and we’ve now shoved those conditions into less fresh territory, which can cause stress,” Dugan says.

However, there is some good news, she says. The Clean Water Act, which began regulating many kinds of pollution in the Great Lakes in the 1970’s, has proven that, given proper legislation, time and effort, we can remediate waterways and make systems as large as the Great Lakes cleaner. And that means, she says, that “if we pay attention to salt pollution, this is a problem we can fix.”

To fix the problem, however, we need to know not just how much salt currently enters the Great Lakes, but also where all that salt is coming from. That’s where the efforts of study co-author, Rob Mooney, come into play.

For previous research, Mooney spent a few summers driving the entire length of the Lake Michigan shoreline and taking water samples at every river and stream he crossed. That work initially led to a study about how tributaries carry nutrients into the lake and trigger algal blooms. But, when Mooney began working with Dugan’s lab, she remembered that he’d kept extra water samples and they were able to test them for chloride concentrations as well.

When they analyzed all of that data and compared it to historic water quality readings, it revealed an interesting dilemma for any salt reduction management strategies, Mooney says.

On one hand, urban areas are obvious salt concentration “hot spots.” The top predictor of high chloride levels in a tributary is the amount of impervious (or paved) surface in its watershed. That means large metro areas like Milwaukee send lots of salt into Lake Michigan. In fact, the highest salt concentrations the study detected were astronomical readings from an outflow carrying stormwater and snowmelt from Milwaukee’s General Mitchell International Airport into Lake Michigan only a few miles away.

But high salt concentrations in a tributary are only part of the problem, Mooney says. It’s also important to consider the amount of water a tributary delivers to the lake.

Five of Lake Michigan’s 300 tributaries are responsible for more than 70 percent of the salt flowing into the lake. This is largely a result of flow, Mooney says. That 70 percent of salt comes from five large tributaries and, while they don’t necessarily have high chloride concentrations, they do carry a whole lot of water into the system. Even if their chloride levels were only a few milligrams of chloride per liter, the millions of liters they bring to the lake can push salinity levels higher.

This raises a tough question for resource managers,  Mooney says.

“The largest tributaries are the largest contributors to the lake in terms of chloride load, but their concentrations are well below any sort of [toxic] threat concentration, so they’re not necessarily a priority for chloride management,” he says. “Whereas these smaller tributaries aren’t putting a lot in, but their chloride concentrations are so high that they get a lot of attention. So there’s this mismatch of which watersheds to prioritize for chloride management – do you think about the stream, or do you think about the lake?”

Whatever their decision, says Dugan, the only way to fix the problem is to use less salt in the first place. And that’s something she thinks can be done, pointing out that municipalities and states across the Great Lakes region are already updating winter road maintenance plans and turning to materials like sand or technologies like brine to reduce the amount of salt they’re using.

Considering the lakes currently receiving enough salt each year to just barely push them toward higher salinity levels, even modest reductions in use have the potential to push the lakes in a “fresher” direction, which, from Dugan’s perspective, is a big deal.

“The Great Lakes are one of the most valuable freshwater resources in the world,” she says. “Would they still be great if they weren’t fresh?”