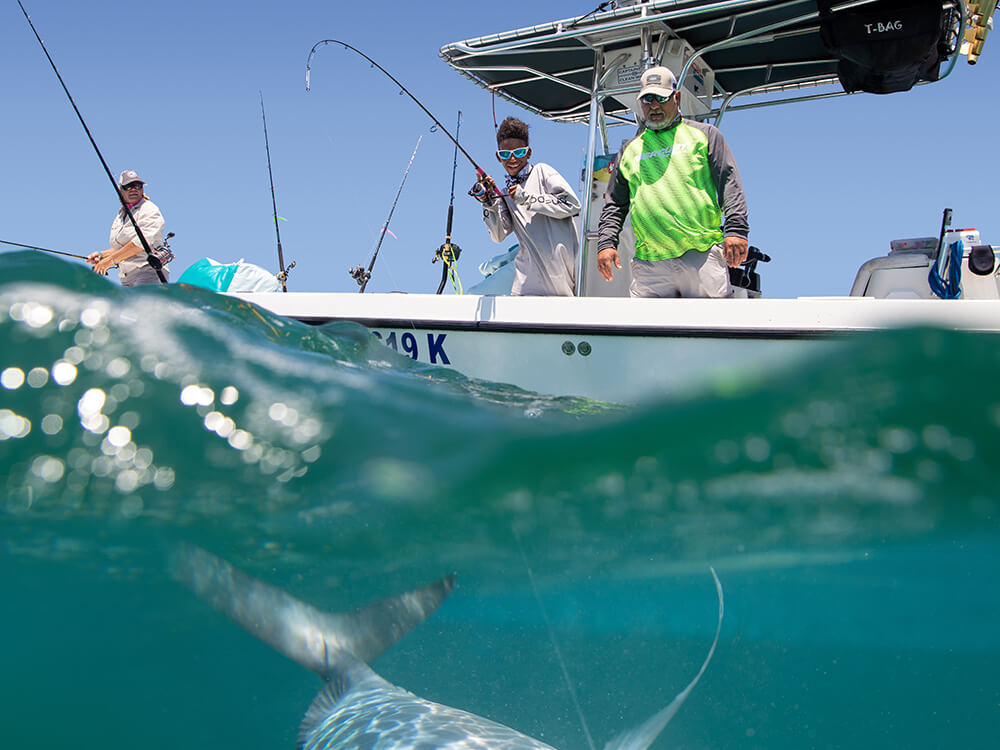 Up and down the New Jersey shore each summer, charter fishing boats and larger “party boats” entice optimistic anglers to head out to sea in search of bottom-dwelling species like summer flounder, black sea bass, scup and tautog.  A charter boat captain hires out their small boat to groups of up to six people for several hundred dollars a day, while party boats can take 50 or more passengers out fishing at a time for a price between $30 and $90 a head.

Together, the two forms of recreational fishing make up a “for-hire fishery [that] is really important in New Jersey,” especially the coastal communities that rely on them, says Ashley Trudeau, a graduate student at the University of Wisconsin-Madison’s Center for Limnology.

While fisheries managers work to keep the fishery in an environmental and economic equilibrium, she says, research has traditionally focused more on the ecological side of the equation – like how fish respond to fishing pressure – and less on the part humans play – like whether or not these policies actually lead to the desired angler behavior.

To get a better understanding of these dynamics, Trudeau and her colleagues at Rutgers University took a deep dive into New Jersey’s recreational coastal fishery by conducting focus groups with anglers up and down the Jersey Shore. The study, which was recently published in the Canadian Journal of Fisheries and Aquatic Sciences, focused, Trudeau says, on getting feedback from people employed in the recreational fishing industry about things like catch limits and season length as well as learning how anglers have responded to fisheries regulations in the past.

Agencies that manage the fishery are “doing their absolute best with the info they have,” says Trudeau, but angler feedback is often collected at public information sessions where the loudest voices in the room are most likely to be heard. The more in-depth and less contentious process of collecting information from focus groups, she believes, helped her team “get at a more realistic snapshot of how people are responding, and not just [acknowledge] the few loud voices.”

For example, one way managers limit fishing pressure on fish stocks is to shorten the length of a fishing season or “close” one early to reduce that year’s expected harvest. At a public information session, it wouldn’t be unusual to hear loud opposition to that decision from a few vocal anglers. Although the loudest voices are often experts in their own arena, their experiences may not reflect those of anglers as a whole. Focus group participants described a variety of responses to regulations that the research team was then able to test against changes in past angler numbers.  This analysis revealed a few interesting patterns suggesting that anglers aboard different for-hire vessels may respond differently to regulations.

Take charter boat fishermen, Trudeau says. For that group of anglers, “one species had to be open. If the season for something was open, you got a big jump in fishing effort.” So, even if some anglers stopped fishing when, for example, summer flounder was closed, there were still plenty of other anglers out on the water fishing for whatever species were “in season.”

This flexibility in the species charter boats targeted underscores another finding from the study, says Trudeau. While fishing regulations do seem to be working as intended to reduce fishing pressure on target species of fish, those regulations don’t impact all anglers the same.

Possession limits, for example, are a way to put a cap on the number of fish an angler can legally keep on their fishing trip and can be a useful tool in attempts to keep harvest sustainable. But, for some reason, possession limits seem to have bigger effect on party boats than charters.

“Possession limit is really, really important in predicting fishing effort – specifically in the party boat fishery,” Trudeau says. “Lots of fishermen use party boats to access fisheries that charter boats price them out of,” Trudeau says. “Party boat anglers seem less willing to substitute for a new species when regulations become stricter for the ones they want to target.”

This may be especially impactful because, over the years, possession limits for summer flounder, for example, have dropped from eight fish to only two or three. While both the charter and party boat fisheries have declined in New Jersey over the last several years, if the party boat industry reacts more negatively to these lower possession limits, that could exacerbate their struggles more than the charter boat fishery.

Of course, these findings raise all sorts of new questions like why the party boat fishery seems to react more to possession limits. And answers to these kinds of questions will help suggest ways to come up with what Trudeau calls “optimal outcomes” that protect both fish stocks and the fishing experience all along the New Jersey coastline. Getting those answers, she says, is easier when anglers are involved in in-depth conversations like the focus groups Trudeau and her team convened.

“Including stakeholders in research and management decisions is really important,” Trudeau says – something with which even the most vocal angler would surely agree.