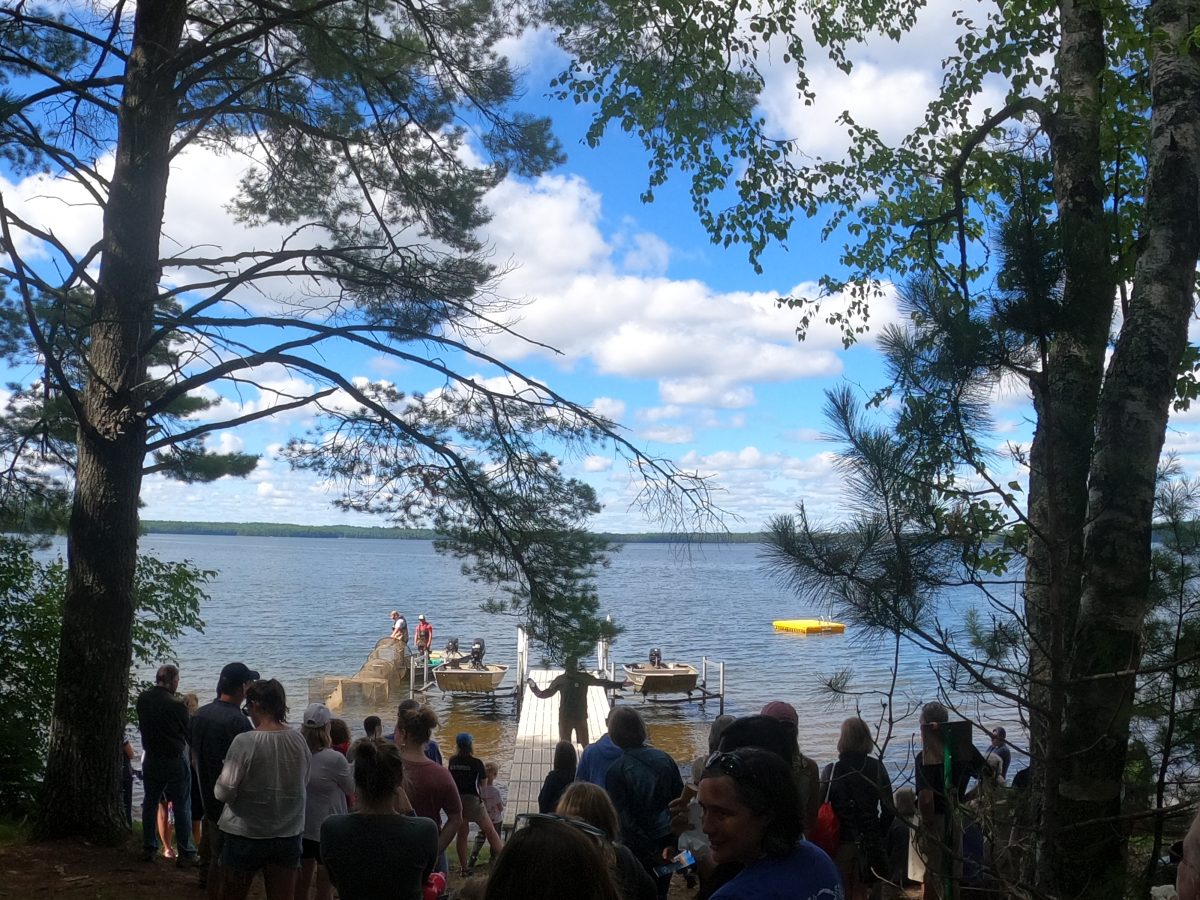 by Christina Weatherford – Trout Lake Station’s annual open house couldn’t have gone better this year. Under beautiful blue skies, records were broken as more than 400 members of the public visited our station to learn about the science occurring on Northwoods lakes. About 20 stations consisting of scientists, crafts, face painting and, of course, free Babcock Dairy ice cream made fresh at UW-Madison and “imported” up north meant that there was something for everyone to enjoy.

This year, visitors had a chance to earn “professional scientist” status by visiting at least 8 stations and completing a task. They were then rewarded at a button-making station where visitors of all ages could color in their own button design and take home a personal souvenir from station. There were plenty of people who got all seventeen.

Some of the stations included finding native crayfish in kiddie pools filled with invasive rusty crayfish, learning how to do coarse woody habitat surveys in a fake lake stretching nearly 50 yards, and searching for invisible zooplankton in the night using black lights! Everyone on station worked hard to create beautiful displays and fascinating activities to spark the public’s imagination and inspire the next generation of limnologists.

Playing “Where’s Waldo” with crayfish was a fun way for people to learn how to distinguish native virile crayfish from the invasive rusty crayfish, and while searching the crayfish research team was there to answer any questions and educate on the current research being done with rusty crayfish and pathogens.

At another station, visitors searched for “invisible” zooplankton in the water column using black light flashlights,. Reese Lavajo and Eleanor Meng painted the water column and created stencils for the zooplankton, and Meng even created daphnia stickers to hand out to the public.

One of the most impressive stations that showed our dedication to outreach was the coarse woody habitat course. Chastin Harlow, an intern for the Wisconsin DNR, spent days collecting logs and fallen trees to create an impressive recreation of a lake shore. He printed simplified data sheets and painted the water line so visitors could experience the work he does regularly identifying these important habitats for species in lakes.

The DNR stole the show with their fyke net, a method of trapping fish consisting of a net with a series of hoops and boxes going into the lake from shore. When the fish hit the net, they swim through these hoops into deeper water and get caught in the last box. This year, a walleye was in the fyke net and kids were able to touch and see up close one of the favorite fish here in Wisconsin. The DNR also displayed native fish in tanks, including pumpkinseed, bluegill, crappie, a muskellunge, and perch.

Another opportunity to get up close and personal to the wildlife in Northwoods lakes was provided by Mason Polencheck, who works on the Microbial Observatory crew. While Mason spent most of his time on microbes this summer, his fascination with mudpuppies – an understudied and often overlooked species – led him to pursue an independent research project on the distribution and life history characteristics of these fully aquatic salamanders. A mudpuppy made a guest appearance at open house to allow the public to see these elusive creatures up close, as they are usually found in colder water at the bottom of lakes.

While most of open house focused on science, there were plenty of chances to explore the artistic side of lakes as well. Visitors could make buttons, and there was a craft station for creating fish magnets. The most expansive and popular of the art options was the Drawing Water program’s booths. Artist interns displayed their paintings and sketchbooks so the public could see what they’ve been creating all summer, and the artists painted faces with lake-inspired designs like fish and crayfish.

It was great to see everyone’s hard work pay off as, throughout the day, each station had visitors almost constantly. With 400-plus people, every station handled the record numbers incredibly well. The interest shown by attendees was energizing for everyone at Trout Lake Station – scientists love sharing what they’ve learned about as much as they love learning in the first place! Overall, open house was a huge success this year and everyone who came left with new knowledge – and some face paint.