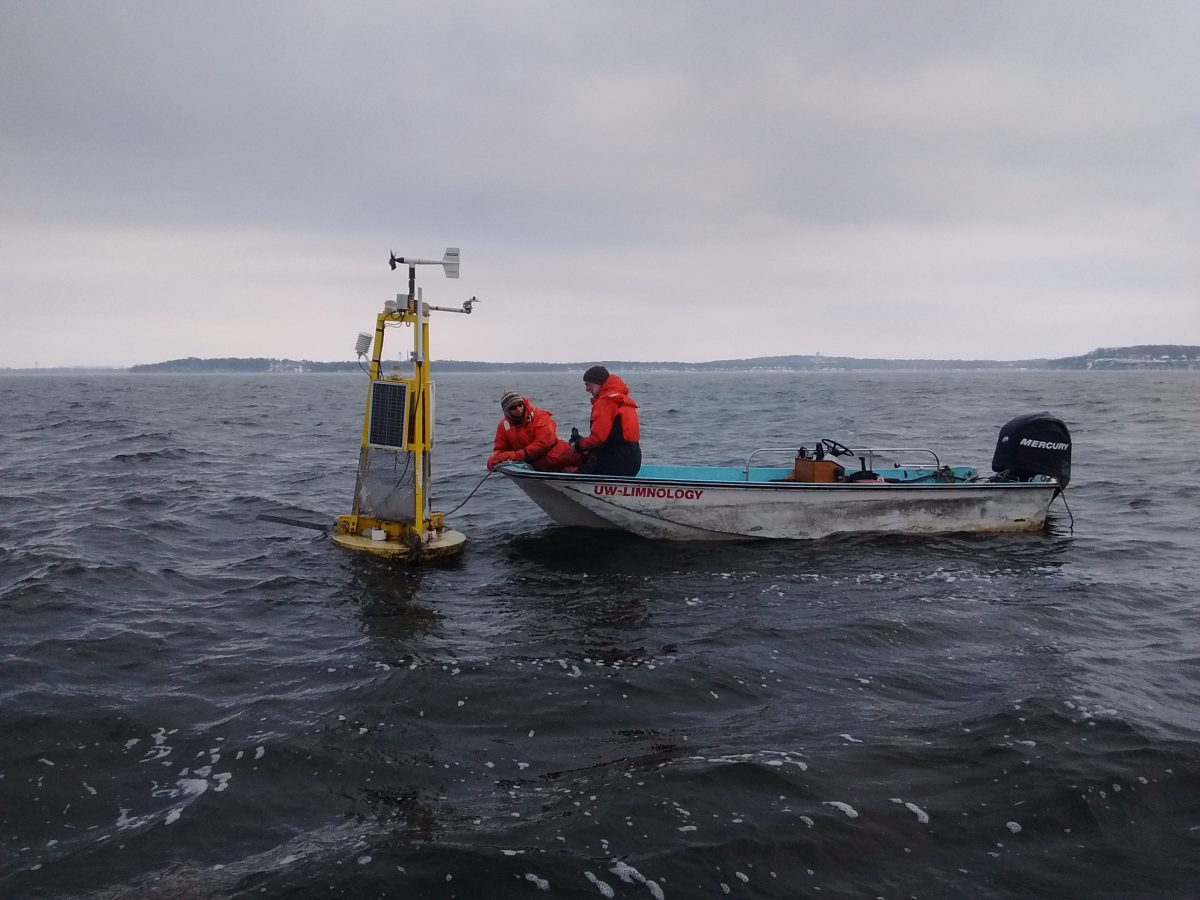 In the lake-rich regions of the world, algae blooms are a growing problem. Not only are the floating green scums a nuisance for anyone hoping to enjoy the water, they can turn toxic and threaten public health.

The main driver behind these blooms is phosphorus – an element used widely in agriculture to fertilize crops – that can run from the land and into lakes, especially during heavy rains. This phosphorus is equally good at fertilizing algae growth but, says a new study, the path from phosphorus “loading” to a big bloom isn’t so straightforward.

The fact that you just had a big storm doesn’t mean “Now we’re going to get a big [algae] bloom. The blooms are much more complicated.” says Steve Carpenter, lead author of a report published today in the Proceedings of the National Academy of the Sciences.

Carpenter, who is director emeritus at the Center for Limnology, joined a team of other University of Wisconsin-Madison researchers for a deep dive into long-term datasets collected on Lake Mendota, Madison’s largest, and longest studied, body of water.

The team knew that only a handful of the highest precipitation storm events delivered about three-fourths of the phosphorus to the lake each year. And, in other lakes, previous research had documented big algae blooms following on the heels of big storms.

But, in Lake Mendota, this dynamic is more complex. “It’s not just, ‘Have a storm, have a bloom,’” Carpenter says. While phosphorus is undoubtedly the key ingredient for an algae bloom, Lake Mendota can stew for quite a while before serving one up.

In fact, the report found that the mean lag time from a big storm to a big bloom is 15 days, with some delays between a heavy, phosphorus-delivering rain event and a notable algae bloom taking up to two months.

So what’s going on? Well, it turns out that phosphorus is only one part of the algae bloom recipe. Carpenter identifies three other key factors at play – calm winds, warm surface waters and a low abundance of tiny crustaceans called zooplankton.

Much like the annual “greening up” that occurs on land when winter thaws into spring, lakes see an explosion of growth, especially algae, as their waters warm. When it’s windy, this algae is mixed into the water column but, when the wind dies down, it can float to the surface and form a bloom. And all of this can only happen if there aren’t large populations of algae-grazing zooplankton. If zooplankton numbers are high, they can eat enough algae to keep a bloom at bay.

Carpenter points to time periods in the Lake Mendota dataset where these variables held the phosphorus-rich lake in check. High zooplankton abundance from the 1980s to early 2000s kept the waters, on average, much clearer. And a cool, gray, cloudy summer in 1993 kept surface water temperatures lower, resulting in remarkably few blooms even though the lake was loaded with phosphorus from heavy spring rains.

The interplay of these variables will make it difficult to reach a point where we can predict algae blooms with any precision, Carpenter says. And they are all also out of our control. That leaves one clear option if we’re going to get water quality trending in a better direction and head off future algae blooms – turn off the tap for phosphorus.

If we can drastically reduce the amount of phosphorus we use on land, that will lead to less of it running off into our waters. While it will take some time for the phosphorus already in a lake to cycle through the system, eventually natural processes will start to use it up and lower the load. It’s not a quick fix, Carpenter says, but it’s currently the only option on the table.

“The sun’s is going to shine, the wind is going to blow, the grazers are going to fluctuate with the food web and species invasions,” he says, “and the one thing you can really control is you can keep the phosphorus down.”

The PNAS Article can be found here: https://www.pnas.org/eprint/YF5K7ZKKJI4AHCVRHJWC/full