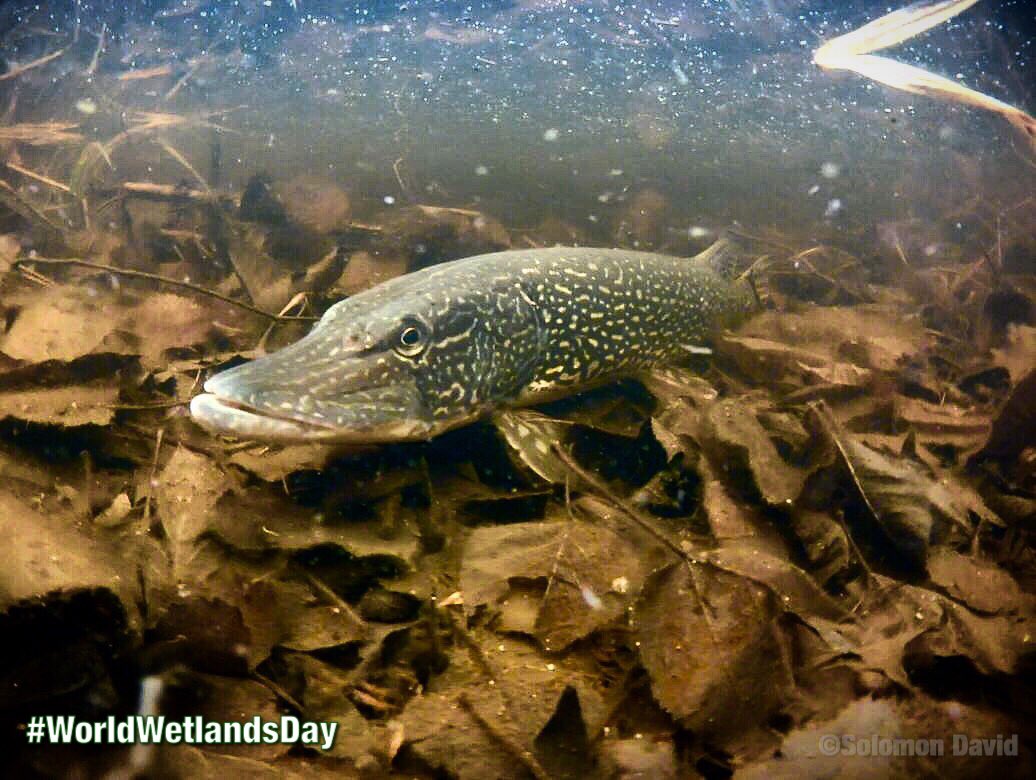 Ah, it’s mid-April in Wisconsin and, right on cue, snow popped back up in the forecast and temperatures this week are going to struggle to get above freezing. Spring, it seems, is on hold for us land-dwelling types.

But, in our rivers and lakes and even roadside ditches, the water is just fine for our fishes. And many species are responding to various temperature cues and heading off on a journey that is their annual rite of Spring.

Last week, we kicked off our “Learn Your Lakes” series with an article on Spring turnover. Sure enough these chilly winds have our lakes all mixed up.

Here, for example, is a chart of current conditions on Lake Mendota. Look at the temperature data – it’s a “balmy” 42 Fahrenheit all the way from the surface waters to 20 meters down. That means the entire lake is completely mixed. And that also means that it is approaching another rite of Spring – spawning season. And that means all sorts of fish migrations are underway.

Now, migration might sound like a big, epic word. And, yes, some migrations are indeed epic. But its literal definition is “seasonal movement of animals from one region to another.” And, for a fish, that movement can be hundreds of miles from the deeper waters of a lake and up a mighty river or even just moving into the shallow, seasonally flooded shoreline of a water body.

Here are three species currently on the move.

Wisconsin’s favorite sportfish is an early spawning species. Soon after ice out, once water temperatures “warm” up to 38 Fahrenheit, walleye start to head out of the open waters of our lakes and move into the streams and rivers that flow into them.

Anglers call these events “runs” and, when the walleye are running, so are the people who love to fish for them. For example, each spring thousands of walleye head out of Lake Winnebago and up the Wolf River, to take advantage of thousands of acres of seasonally flooded spawning marshes. The males usually head upriver first and wait for the females to arrive.

After spawning, the fish move back into their feeding grounds and any resulting offspring are left to fend for themselves!

We admit that we’ve got a soft spot for suckers. Both longnose and white suckers are abundant in our waters but, for some reason, they have a bad reputation. In fact, many anglers have dubbed them “trash” fish and it is, unfortunately, not uncommon to see their bodies piled up on banks where they’ve been tossed after being accidental by-catch as fishermen pursue other species.

But we’re here to tell you that suckers are awesome. Not only are young suckers an important part of the diet of other fish, the adults can be a crucial part of spring for entire ecosystems. They move upstream in incredible numbers and the waste and eggs they leave behind provide an important influx of nutrients that can “jump start” productivity in these sucker spawning waterways.

Here’s a video of our work tracking sucker migrations in Wisconsin.

It’s not uncommon to find one of the biggest, baddest freshwater predators in a far from glamorous situation during the spring spawning migration – wriggling it’s way up a roadside culvert or agricultural ditch.

But that’s exactly what a northern pike will do if that’s what it takes to reach suitable spawning habitat.

Like most of our freshwater fishes, the human desire to live right on a body of water, as well as our attempts to control its flow, is often a barrier to fish migrations. Dams and culverts keep fish from moving upstream and shoreline development does away with the soggy, marshy areas they need to spawn.

But, thankfully, there are still some intrepid pike making these springtime journeys. And, as Dan Oele, our former student and now Wisconsin DNR fish biologist, knows – if you build it, pike will come.