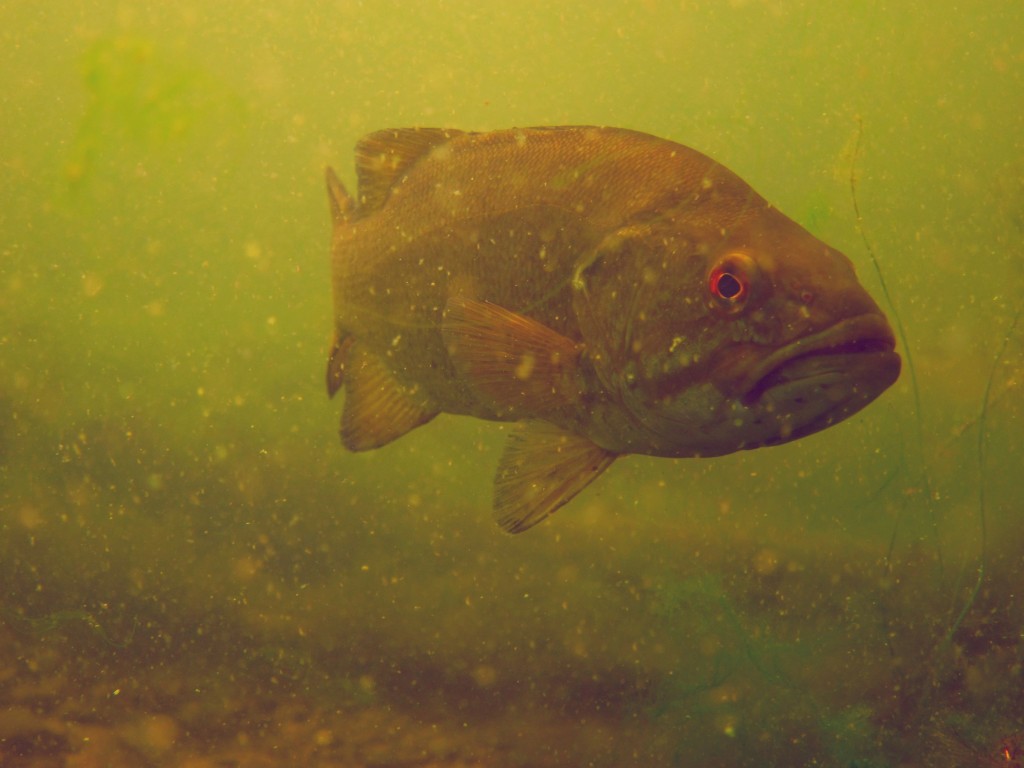 Yesterday, the folks over at The Meat Eater blog posted an awesome article about the link between fish size and habitat featuring CFL alum, Jereme Gaeta. We thought readers of this blog would also be interested and they were kind enough to share. Enjoy!

by Stephen Klobucar – Sam Rayburn. Okeechobee. Castaic. Erie. St. Clair. Rainy. Lake of the Woods. Wollaston. Pyramid. True lunkers have long bestowed lure and lore to some of North America’s most esteemed lakes that are better described in hundreds of square miles than mere acres. Simply put, big waters have big reputations for big fish. It’s an easy association to make—if you want to catch bigger fish, head for bigger lakes. But, if middle school statistics taught me one thing, correlation doesn’t necessarily equal causation. If nothing else, the formula isn’t that simple. The hierarchy of big fish waters doesn’t start with the Great Lakes and end with farm ponds. It’s more complicated than that. As a matter of due diligence, let’s delve into the who, what, when, where, why, and how of fishes achieving “hog” status. Let’s take a peek below the water’s surface and try to answer this age-old question—do bigger lakes really grow bigger fish?

Lake Habitat Basics
Just like any other organism, fish need food, water (duh), shelter, and the ability to successfully reproduce. But not all habitats are equal. Generally speaking, larger waterbodies encompass more diverse habitat zones—deep and shallow bays and basins, rocky and weedy shorelines, and a wide range of water temperatures. Big fish get big by living in the best habitat. Lakes with more preferred habitat can support more numerous and bigger fish populations, but how specifically does habitat affect fish size and numbers?

Shelter
At first mention of fish habitat, I’d wager most anglers imagine physical structures that sport fishes are drawn to—brush piles and down trees, submerged vegetation and lily pads, rocky points and bars, etc. For juvenile fish, structures are attractive for safety and shelter. Many adult fish use physical structure for spawning, which protects their young when they emerge. Even the biggest, baddest fishes often relate to structure for protection. Why? Despite claiming the top of the lake food chain, danger still lurks above the water’s surface (check out this video from last summer).

Big lakes and reservoirs often contain miles of quality shelter habitat like fields of lilypads and forests of flooded timber. Deep in these mazes, certain fish may be able to grow especially large while avoiding humans and other predators.

Big lakes are likely to have more features that produce diverse and abundant food resources. Big fish often grow bigger when they have big and/or plentiful bait to eat. Bass get huge where rainbow trout are stocked. Muskies and pike get longer where they have access to open-water ciscoes or kokanee. Trout and char reach next-level proportions in large waterbodies that support pelagic populations of Mysis shrimp or freshwater krill. Big lakes often provide this intersection of common predators and big water prey.

Water
Now, now, before you go all “Thanks, Captain Obvious,” hear me out. Yes, fish need water. But the water fish swim in also includes multiple aspects of habitat—temperature range, oxygen levels, water clarity—all of which affect how much fish grow and how many fish a lake supports. For high-quality fisheries, suitable habitat encompasses temperatures fish prefer, sufficient dissolved oxygen to “breathe,” and the ability to see their prey. Because fish are cold blooded, there’s an optimal temperature at which their metabolism is most efficient, which largely determines their growth rate. Optimal temperatures are different for each fish species and can vary between life stages of the same species. Juvenile walleye do best around 77°F whereas an adult walleye’s optimal growth occurs near 71°F. Brown trout prefer about 63°F, while cutthroat trout are best suited near 57°F. Those same fish can live and grow in less-than-optimal water temperatures, but they’ll grow biggest and fastest where they can find perfect conditions. Big lakes can help facilitate finding that sweet spot.

Fish Growth Basics
All told, fish growth breaks down to a simple equation: energy in = energy out. If a fish consumes more energy than they use for life’s basic functions, they grow larger and/or produce more offspring. In waters with more calorie-rich food that can be obtained using minimal effort and digested at temperatures where their systems function most efficiently, fish grow more. If there’s less food, fish use more energy to find it, and they might resort to lower quality food that provides less overall energy. Fish won’t grow as much under these conditions. Likewise, if it’s too cold, fish are lethargic and can’t convert food to energy as efficiently. If it’s too warm, fish must eat constantly to keep up with their metabolism, leaving little leftover energy for growth. As lake conditions constantly change, fish strategically shift that growth equation in their favor. Depending on the season, fish can move to more suitable temperatures, but other aspects of their environment are out of their control.

Habitat Management and Natural Changes
Fisheries managers work to keep aquatic ecosystems healthy and balanced, but they’re expected to tip the habitat balance in the favor of fishes, and accordingly, anglers. Managing any waterbody is incredibly complicated, but large lakes present even greater challenges due to the sheer volume of water and number of fish—big changes are needed to make big improvements. The diverse habitats in larger lakes, however, can provide a buffer to adverse changes. Smaller, unaltered lakes with low fishing pressure can achieve a more natural ecosystem balance than developed and highly pressured lakes, but these days lakes like that are few and far between, and when they do get out of balance, lakes like that can collapse quickly.

Dr. Jereme Gaeta, a research scientist with California’s Department of Fish and Wildlife, has published aquatic habitat research from coast to coast, working extensively in lakes of the Midwest and Intermountain West.

“In a closed system like a lake, habitat is going to be limited. There’s only so many down trees for largemouth bass to spawn by, there’s only so much cobble (softball to football-sized rocks) or macrophytes (aquatic plants) for fish food to grow in,” Gaeta said. Thus, habitat limitations can largely determine the overall success of fish populations. In Western lakes, for example, drought-driven water level declines can cut migratory trout off from streams and spawning habitat, resulting in significant population declines.

In another study, following a long-term drought in Northern Wisconsin, Dr. Gaeta determined that when shoreline woody habitat dried out, largemouth bass growth rapidly declined. Without structure for smaller fish to hide in, bass ate themselves out of house and home. It would take nearly 20 years for a bass to reach 14 inches. They were relegated to constantly swimming and wasting energy in search of lower quality food. In contrast, when woody habitat was available and provided food and protection for smaller prey fish, bass grew to 14 inches in about 6 years.

Human-Induced Habitat Alteration
Aside from natural changes, the general public can also have measureable effects on fish habitat and fish populations. “[Lake residents] want a clean shoreline to land a boat, a beach for their children, an unobstructed lake view, a nice manicured lawn,” Gaeta said. But when fallen trees are removed from a lake, and standing trees are cleared from the shoreline, current and future habitat is lost. That changes how fish can reproduce, eat, and survive. Using radiocarbon dating, researchers have found that some fallen logs may be submerged habitat for centuries, even millennia, so it takes a long time for that structural habitat to return naturally.

“If you’re a fisheries manager and you want to make bigger or more fish, you have a couple options,” Gaeta explained. “You can directly add more food by stocking, but that costs a lot of money and doesn’t always work. You can reduce populations of targeted species, but anglers might not like that, or you can add habitat and allow the lake to naturally create more food.” In this regard, management agencies often add structures to enhance fisheries, which can be more readily successful in smaller lakes.

On the flip side, in Lake Okeechobee, Florida, one of the nation’s largest and most famous largemouth bass fisheries, application of herbicides and use of mechanical harvest of aquatic plants and grasses have impacted the lake’s habitat, fish populations, and overall water quality in favor of more navigable waterways. “If you’ve got good grass, you’re going to have a good spawn, and in return the fry have cover to hide. That just makes places flourish, the bass grow big fast, but it goes south quick until [the grass] comes back,” Justin Lucas, the 2018 Bassmaster Angler of the Year, told MeatEater in regard to the Big O.

Further, invasive species, such as zebra mussels or non-native aquatic plants, change habitats and throw ecosystems out of balance. In Mille Lacs, Minnesota, invasive zebra mussels and spiny water fleas increased water clarity in the lake, but since walleye feed better in murky and low-light optical habitat, the shift has contributed to the decline of the once booming walleye fishery, whereas smallmouth bass and muskie now thrive.

Go big or go home?
“At the end of the day, to grow bigger fish or to make more fish, the fish need to have more food and they need to have optimal temperatures,” Dr. Gaeta reiterated. “If it’s a giant lake, you may have a situation where a fish can grow more because there’s a lot of diverse habitats.”

All else equal, famous fisheries attained their status and notoriety through the success of anglers and the wealth of their catches, and that’s a correlation I can get behind. With sufficient favorable habitat, big lakes can live up to their big reputations. But that’s not to say that remote, unique, or especially well-managed smaller waters can’t produce lunkers too. If you want to find that fish of a lifetime, you can either follow the crowds to massive lakes, or use some creativity to find spots of your own.