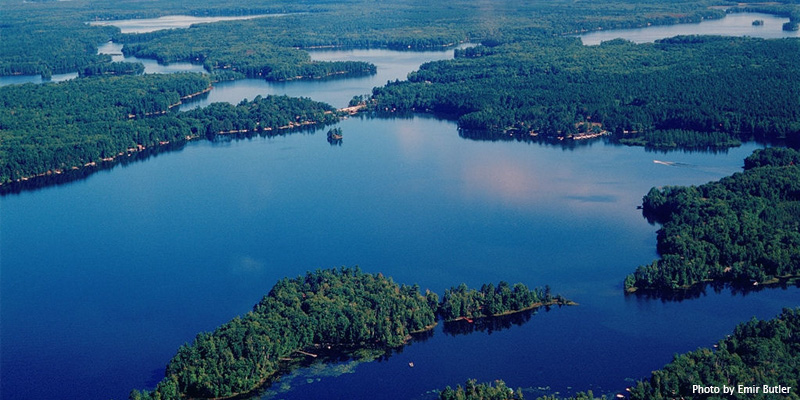 In the Upper Midwest, the water temperature in a lake may be as different from the lake next door as one at the opposite end of the state. While this may save Midwesterners a long drive “up north” to find a lake cool enough to beat the summer heat, it also has important implications when it comes to aquatic invasive species.

Or, to be more precise, says Jake Walsh, lead author of a study published July 27th in Ecosphere, it has implications for the way scientists try to predict if a lake has suitable habitat for an invasive species. Each individual aquatic species – whether it is a fish, plant or tiny little zooplankton – has a temperature range in which they thrive. If the water is too warm or too hot, the species struggles and the odds that it will be successful enough to “invade” a lake are quite low. If the water is “just right,” then it becomes vulnerable to invasion.

Walsh, a program coordinator with the Minnesota Department of Natural Resources, says that, typically, studies that evaluate a lake’s “thermal suitability” for different aquatic invasive species use air temperatures in place of water temperatures. That’s because data from the thousands of weather stations scattered across the country is fairly easy to get and air temperature does offer some insight into general water temperatures across a region.

But, if you look at lake-to-lake differences within the that region, Walsh says, water temperatures can vary dramatically  – Influenced by characteristics like size, depth, shape, and water clarity.

Walsh and his colleagues explored what these temperature differences might mean for aquatic invasive species by comparing the traditional air temperature model with a new state-of-the-art computer model that combines air temperature data with other lake characteristics to better predict water temperatures on a lake-by-lake basis. The model, originally developed at the University of Western Australia, was applied to more than ten thousand lakes in the Upper Midwest by a research team at the U.S. Geological Survey.

As a case study, Walsh’s team turned to a cool-water invasive species called the spiny water flea. The spiny water flea originally came to the Great Lakes region from northern regions of Europe and Asia in the ballast water of ocean-going ships. The invasive flea can have pronounced impacts on water quality and a lake’s fishery, making it a priority species that resource managers attempt to prevent from spreading. An important tool for that prevention is knowing what lakes are vulnerable to invasion in the first place. Lakes with temperatures similar to the spiny water flea’s “home range” are high on that list.

And the air temperature model, Walsh says, “offers “a ‘30,000 foot’ view of vulnerability.” In other words, it can help scientists identify areas, like the Great Lakes region, that have a similar climate to northern Europe and Asia.

Using a subset of lakes in Minnesota, Wisconsin, and Michigan, Walsh and his colleagues found that both the traditional air temperature and the newly developed water temperature models offered similar perspectives on this “30,000 foot view,” predicting that the northern half of their study region was generally more suitable for the flea to spread.

But the big picture obscured a lot of lake-to-lake differences. When Walsh’s team the took a closer look at more than 10,000 individual lakes across the region, more often than not, the two methods disagreed.

Since water temperatures are influenced by both climate and lake-specific traits, Walsh’s team also developed an air temperature model that included lake depth, which is a measurement that, like air temperature data, is widely available. Adding depth to the air temperature model reduced the 53% model disagreement to 22%. While an improvement, that 22% still represents over 2,000 lakes that were identified as suitable spiny water flea habitat by one model and unsuitable by the other.

“These differences have major implications for understanding the current and future vulnerability of Midwestern lakes to spiny water flea invasion,” says study co-author Jake Vander Zanden, director of the University of Wisconsin-Madison’s Center for Limnology. Scientists currently expect a contraction in the number of lakes vulnerable to spiny water flea invasion as climate change forces lakes to warm past their window of suitable temperatures, Vander Zanden notes.

The traditional air temperature models indicate that the vast majority (89%) of upper Midwest lakes are currently suitable for spiny water flea and predict that suitability will decline to just a single lake by the end of the century, he says. But the water temperature model paints a much different picture.

The full text of the Ecosphere article can be found here: https://esajournals.onlinelibrary.wiley.com/doi/full/10.1002/ecs2.3137