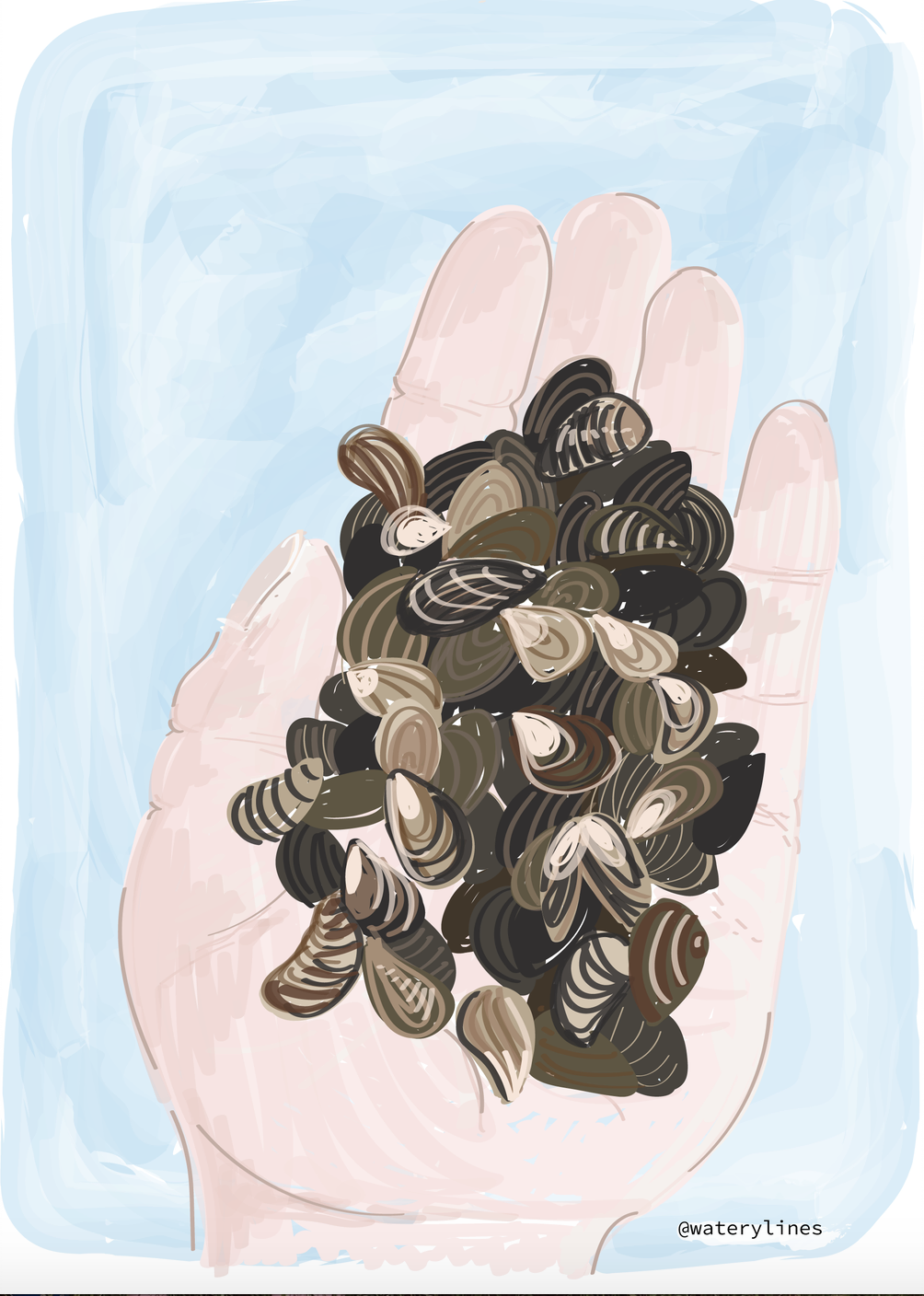 by Julia Buskirk – In 2015, Petra Wakker began her college experience alongside Lake Mendota. She was no stranger to this waterway—before walking alongside the lake on her way to classes at UW-Madison, Wakker had already been working at the Center for Limnology for two years. “I don’t remember a time when I didn’t want to do this,” Wakker tells me as we discuss her passion for aquatic science. While many of us love looking out at Lake Mendota, taking in the grandness of the waves and the sky and the blues, “I’m staring down at the bottom looking for insects,” she laughs.

It’s no wonder Wakker looks to the details of Lake Mendota. Many of the subjects she studies in these depths go largely unnoticed to people who aren’t researching them, organisms like the Spiny Water Flea, an invasive zooplankton species whose populations rose to staggering heights in 2009 and have been altering Mendota’s ecology ever since. But the Spiny Water Flea’s domination of native zooplankton over the past decade was only an introduction to the ecosystem changes Wakker would witness during her four years of college.

As Petra was moving into the dorms and taking her first courses at the university, another newcomer was making their home along this shoreline. The first Zebra mussels had settled into the depths of Lake Mendota.

These mollusks are about the size of your fingernail, with dark zigzags on their shells that give them their name. They colonize any available hard surface, taking over rocks, piers, and even the hard shells of other organisms. They were introduced into the nearby Great Lakes in the 1980s from the ballast water of cargo ships (a similar saga for the Spiny Water Flea), so it was only a matter of time before humans would inadvertently transmit them to the Yahara Watershed.

To monitor the population growth of the new species, a team at the Center for Limnology began taking inventories on the bottom of Lake Mendota.

In her second year of college, Wakker joined this team. They marked off areas on the floor of the lake, called quadrats, where Wakker and fellow scientists counted all the Zebra mussels and other bottom-dwelling insects and organisms.

In Wakker’s Sophomore year of college, she remembers counting only a handful of mussels in a quadrat. But by her Junior year, “It got to the point where you had to go down to 1/16 of the size of the quadrat because you simply could not pick all of the mussels out,” she remembers. Today, tens of thousands of Zebra mussels occupy every square meter in Mendota’s shore.

Like Spiny Water Flea, these invasive mollusks are dramatically altering food webs. But in many ways, their impacts are even more pronounced. As filter feeders, Zebra mussels suck in water and filter out all of the algae and microscopic animals for consumption. Wakker explains that their high numbers and ferocious feeding means that they are essentially sucking all of the nutrients out of the water column and shifting them to the bottom of the lake.

The increase in nutrients on the lakebed then encourages populations of bottom-dwelling beings to boom alongside the invasive mussels. “Invertebrate samples that would have taken an hour or two to count in 2016, now take four different people working on it for three hours,” Petra says.

By congregating the nutrients at the bottom of the lake, Zebra mussels are changing the way food moves through Lake Mendota. Fish like Perch or Walleye who rely on getting nutrients from the open waters are now experiencing water that’s barren from the mussel’s consumption. Carp, on the other hand, thrive in these new conditions as most of their feeding occurs on the lake’s floor. With clearer water, sunlight is also penetrating deeper, supporting huge algal growths on the lakebed. These massive thick mats of algae break off, washing onto the shores where they’ll settle to rot and smell.

We can smell another effect of the Zebra mussel’s prolific filter feeding; while these animals will eat almost every microscopic being out of the water column, they avoid consuming blue-green algae, a toxic cyanobacteria known to cause adverse health effects in humans and create massive fish kills as blooms deplete oxygen levels. By filtering, Zebra mussels are essentially clearing the waters of all competing algal growth, encouraging much larger and abundant toxic blue-green algae blooms.

These are the days Mendota looks green.

By the time Wakker finished her undergrad in 2019, Zebra mussels had completely transformed Lake Mendota. “It’s a different system now than it was before, and we don’t entirely know how that system works yet,” Petra reflects. “And that’s one of the biggest things with invasive species, is that they have this potential to completely transform how a system works.”

While humans have been shifting Lake Mendota over the past two centuries, we are now letting loose animals that can shift the lake at even more rapid rates. While Petra was busy with classes, research, and work, the Zebra mussels were changing Lake Mendota forever.

This post was originally published on the blog, Water Lines, August 24, 2020. Water Lines is part of the UW-Madison “Holding History” project. Cover illustration by Julia Buskirk.