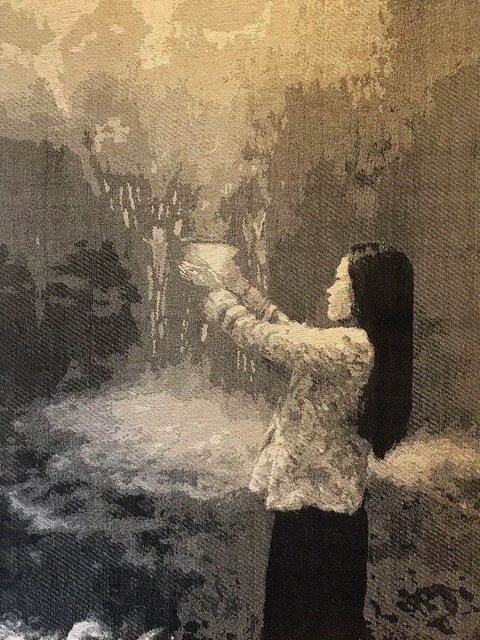 Like most people who choose to live in Wisconsin’s Northwoods, water holds a sacred place in Mary Burns’ life. The Manitowish River runs by the cabin her grandparents once owned – the place she now calls both home and art studio. Water is a common thread that runs through her career as a weaver and it inspired an ongoing project that Burns (virtually) shared with attendees at the 2021 Wisconsin Water Week conference last Wednesday.

Called “Women + Water,” the project is a series of weavings that portray women who work with, protect and advocate for water.

“In many cultures, globally, women are the protectors and keepers of the water,” Burns, told her audience, noting that the inspiration for her project grew out of previous exhibit of woven portraits of indigenous women in Wisconsin.

That exhibit featured one weaving for each of the twelve tribes of Wisconsin (while eleven Wisconsin tribes are currently “federally recognized,” Burns recognizes the Brothertown Indian Nation as the twelfth). “In working with the women and their communities and families I became aware that they have such a reverence for water,” Burns said.

One of those women was Grandmother Josephine Mandamin, an Anishinaabe First Nations grandmother, elder and founding member of the water protectors and “Water Walk” movement.

A water walk,  Burns explained, “is a ceremonial journey along or around a body of water to raise awareness of its importance and for its health and conservation.” During a water walk, it is the women who do the heavy lifting – literally – as they carry water in a copper kettle for the entirety of their journey. In 2003, Grandmother Josephine set out to walk around Lake Superior. By the end of her life, she had walked around every Great Lake at least once, traveling an estimated 15,000 miles on foot.

“She was the first person I contacted about when I was thinking about this exhibit,” Burns said. “She gave me her blessing to include her and make the exhibit happen.”

There is a weaving of Rachel Carson, author of “Silent Spring,” but, first and foremost, an accomplished marine biologist. Another woven portrait celebrates Monica Lewis-Patrick, an activist who founded We the People Detroit to advocate for safe, accessible drinking water in marginalized communities.

Some of those women in the exhibit are Center for Limnology researchers Burns met during her “Artist in Residence” stay at the CFL’s Trout Lake Station and subsequent research of freshwater science being conducted in Wisconsin – scientists like Gretchen Gerrish, Carol Warden and Emily Stanley.

Burns is currently searching the globe for other inspirational women to add to her exhibit. “All of these women are just so inspiring,” she said.

We couldn’t agree more. And we count Burns, herself, as one of them.

To learn more about Burns’ work, visit – https://manitowishriverstudio.com/ – and tune in Wednesday, April 7th, to Science on Tap-Minocqua where Burns will share her thoughts on art and science and display some of her art to another online audience.