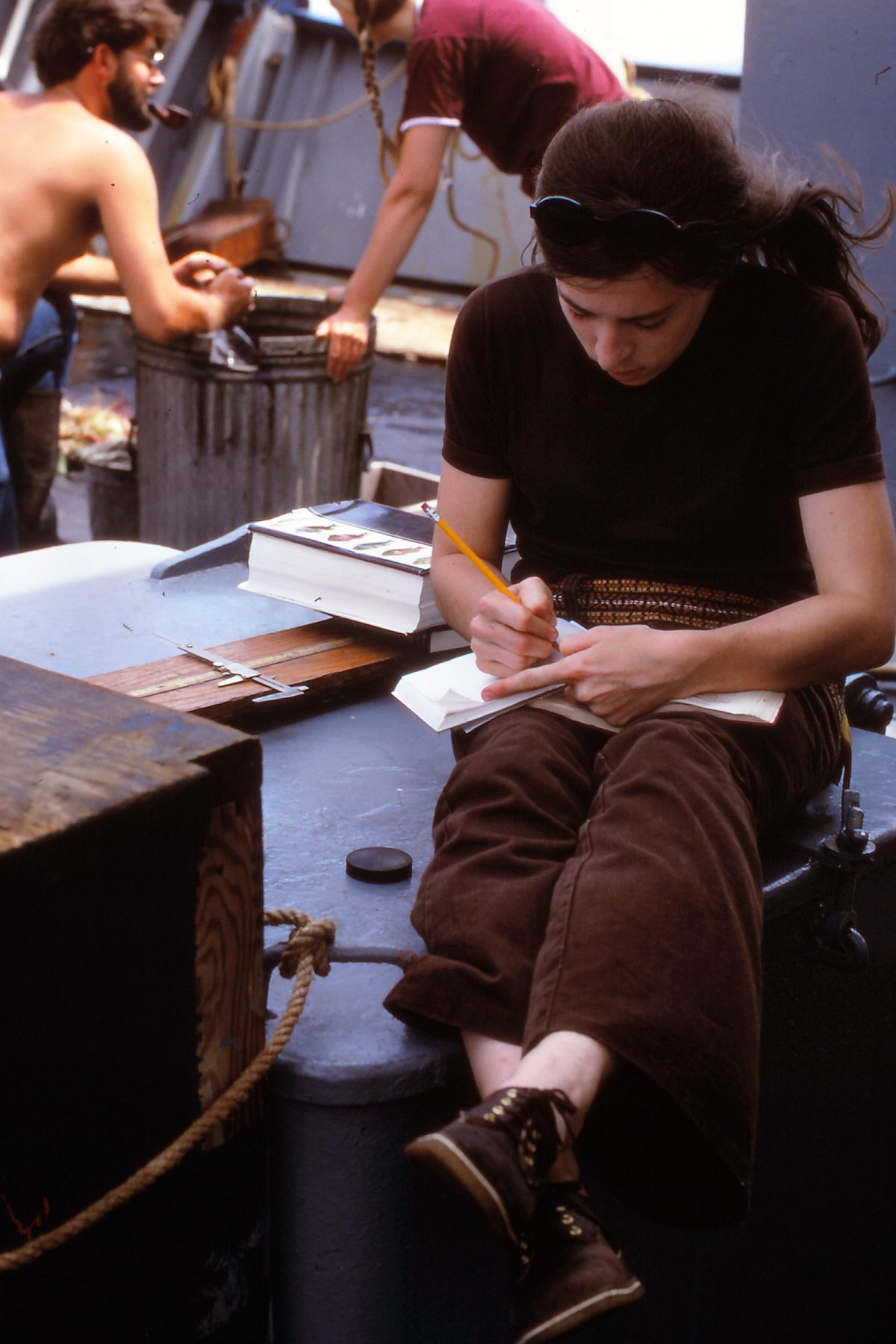 In late April of this year – on Earth Day, to be exact – Center for Limnology alumna, Lorna Petty Harrell passed away. Lorna earned her master’s degree in zoology in 1972 at what was then referred to as the Laboratory of Limnology. She was the first female graduate student in John Magnuson’s lab and while in Madison, did her research on the impacts of the power plant outfall on bluegill populations in Lake Monona – a project that won her an award for the best student paper at the American Fisheries Society conference.

Lorna went on to a long career in freshwater research and conservation, working in high-level positions for environmental consulting firms, soil and water conservation districts and universities in northern Kentucky and southern Ohio. However, it was a career she fought hard for, as being the only woman working in a field dominated by men and the expectations of a “woman’s role” in it, threw many obstacles in her path.

As Lorna’s husband, Dennis, writes, “Her career certainly resembled a patchwork quilt, one not always of her choosing.  Whether large or small, she threw herself into each project with determination and produced the best results possible under the circumstances. … She was extremely disciplined and organized, wasting little time on small matters but always focused on the goal. The world could use a few more like her.”

In a 1998 article she wrote in the CFL newsletter, Lorna calls her career a “patchwork quilt” and spoke eloquently and honestly about navigating an often lonely path. We are sharing it here in its entirety as we feel that it is important to recognize both how far we have come in the freshwater sciences and how far we still have to go.

We are saddened at the news of her passing and honored that the “Limnology Lab” here on Lake Mendota was part of her journey.

My Career in Science

Some people have careers that appear as seamless progressions of accomplishment, but I am not one of them. My career to date has been more analogous to a patchwork quilt, with some squares that don’t quite match and others still to be sown. It hasn’t been what I had envisioned but, in some ways, the patchiness seems characteristic and inevitable.

Looking back on my patchwork career, two factors have strongly influenced its pattern: my gender and my far-ranging interest in water resources issues.

The gender factor comes first because it so often confined and defined the earlier years of my career. In preparing this article, I reread an essay, “Gender Issues in the Workplace,” which appeared in Fisheries (October 1994). It was dismaying and sad to read, for it confirmed that women fisheries professionals today are struggling against many of the same stereotypes that confronted me in the mid-70s – that we are not serious about our careers, we disrupt or cannot do fieldwork, and we are better suited to clerical tasks. I have experienced all of these misconceptions. And, yes, my career path was profoundly altered as a result.

Like many young women graduating from high school in the 60s, I received little career guidance from my family or from school. For as long as I can remember thinking about it, I assumed I would be a teacher. (What else could a woman do and fulfill her familial duties?) Luckily, my high school biology teacher, a bright and energetic woman, encouraged me to apply for a National Science Foundation summer scholarship. The summer after my Junior year, I spent six wonderful weeks at Clemson University. It was a pivotal experience, providing me an exciting introduction to the career diversity possible in the life sciences.

Throughout college, I followed my plan to teach and in 1969, I received a bachelor’s degree in zoology and science teaching from Miami University in Oxford, Ohio. Eager to launch my career, I accepted a position teaching biology and zoology at a premier college prep high school in Cincinnati. That year dashed my idealism about teaching and stimulated me to pursue graduate studies.

I chose aquatic ecology because of my interest in ecological systems and a life-long fascination with lakes and streams.

In July, 1970, I entered the graduate program at the Laboratory of Limnology where I became the first woman grad student in many years. Because of my innocent intrusion into this male domain, I became an object of curiosity and, at times, considered myself a social pariah. In short, my first year at UW-Madison was hard and lonely.

At the same time, my adviser, John Magnuson, was as determined as I that I succeed, and he generated funds, ideas and perpetual challenges to assure that I did. Bill Neill (Ph.D. 1971) was the mentor for my thesis work on the effects of heated effluent on lymphocyctis (a viral disease) in age 0 bluegills near the power plant outfall in Lake Monona. My second year in Madison was one of the best in my life. I felt accepted for who I was and my research began to coalesce, thanks to a ot of field help and moral support from many, including Ken Mills, Roy Stein, Bill Shaffer, Bruce Quirk, Tom Byles, Paul Baumann and Frank Eustace. I also felt less pressure to prove myself when two more women entered the limnology program in 1971.

As I finished my degree in June 1972, I came under intense pressure from my family to return to my home in northern Kentucky, because my mother was seriously ill. There also was a young man in Cincinnati who wanted to marry me. It’s hard to capture my feelings that summer day when I pulled away from the lab with all of my belongings. I remember stopping to take a long look back before I headed south.

Within a month of my arrival home, I landed my first post-graduate “position” – washing test tubes in the water quality lab at Procter & Gamble. It was a “steeping stone” to the position I was offered at the end of the summer, as a technician counting algae. As my boss explained, “P&G doesn’t allow women in staff positions.” I decided to continue my job search.

That September, I presented my thesis work at the American Fisheries Society meeting in Little Rock, won the award for best student paper, and caught the attention of someone with connections at Dames & Moore, a consulting firm where I had been trying to land an interview. Within a few weeks, I was married, my husband was in law school, and I became the breadwinner – counting algae at Dames & Moore! This time was different, however, because I was promised a staff position (just like the men with similar academic credentials), if I did an acceptable job of writing a plankton report gratis. I did, they liked it, and soon I was promoted to an ecologist position.

During the next three hectic years at Dames & Moore, I worked on myriad environmental inpact projects in several states, including proposed nuclear power plants, oil pipelines, and an open pit copper mine. I collected plankton samples during a spring snowstorm in northern Wisconsin, picked condoms (and a few fish) from seines near a power plant in the Ohio River, and lost my waders and electroshocking gear when our boat overturned in the Brazos River in Texas.

During it all, I was the only woman biologist among the seventeen assigned to our Cincinnati office. I rose to project manager, but I never did become “one of the boys.” When the bottom dropped out of nuclear power planning in the mid-70s, my name was high on the list for down-sizing. Their rational was that my husband, who had just graduated from law school, had a good job. It was October 1975, and I was unemployed and pregnant.

The next several years were a career abyss that is hard to chronicle. They were also years of parenting two small children, homemaking, pediatrician and nursing homes visits, limited child care options, and utter exhaustion as I tried with difficulty to keep my resume alive. During this time, my mother’s health deteriorated further, other family problems mounted and, as the only daughter, I found myself in the “sandwich generation” before the phrase was ever coined.

For more than 10 years, I maintained some semblance of a career by doing various things – subcontract consulting work, directing the program of a small museum, supervising a summer research program at Thomas More College, and teaching introductory biology labs and ichthyology at Northern Kentucky University. I even worked on the 1980 Census.

In late 1986, I made a cold call to the Ohio-Kentucky-Indiana Regional Council of Governments (OKI) and within a few weeks began working there as an environmental planner in water resources. OKI would have seemed an unlikely place for employment earlier in my career, but it seemed suitable at this juncture because it combined technical expertise with writing, public education, and interacting with other governmental agencies and elected officials. I acknowledged being a “big picture” person.

OKI is the regional planning agency for the eight-county, tri-state area of greater Cincinnati, which includes more than 160 units of local government in a 2,500 square-mile area. The agency works on an array of regional issues related to transportation planning, commuter services, and air and water quality. Our water quality team works on issues related to public water supplies, wastewater treatment, groundwater protection, non-point pollution, and watershed management. We interact with other agencies, including the U.S. and Ohio EPA, Ohio DNR, U.S. Army Corps of Engineers, health departments, conservation districts and local elected officials – ranging from township trustees to the mayor of Cincinnati.

During my first few years at OKI, many of my activities focused on groundwater planning and management, a new area for me. Initiatives included securing federal Sole Source Aquifer designation for the Great Miami Buried Valley Aquifer system, one of the nation’s most productive groundwater resources, and developing maps, reports and inventories of potential pollution sources as tools for wetland protection.

Since 1992, I have served as OKI’s environmental services manager with overall responsibility for the water quality program. I have tried to broaden the scope of our activities as local needs and funding opportunities present themselves.

While groundwater protection continues to be an important focus for OKI, my current special interests are volunteer stream monitoring and watershed management. I facilitate a multi-jurisdictional watershed steering committee for Mill Creek, a blighted stream running through the heart of Cincinnati. I am immersed in writing a watershed management plan to guide the process and leverage funding for a long-term improvement effort. At the same time, I am managing a contrasting project on a rural stream prone to serious stream bank erosion because of glacial geology and intense agricultural activity.

My days are long and full with these projects, along with the constant need of our local governments to do more with less money. I gain perspective when I realize that, in time, these projects will also become squares in the patchwork design of my career. As I reflect on obstacles I’ve overcome and mistakes I’ve made in piecing it all together, I know the design isn’t perfect but at least it’s mine. And it isn’t finished yet.

Editor’s Note (1998): Since this was written, Lorna has begun another “patchwork square” with the Butler County (OH) Soil & Water Conservation District. Her new position is watershed coordinator for a nonpoint source pollution education project in the headwaters of Mill Creek. In the interim, her two children have gone off to college, she has turned 50 and, like Hilary Clinton, she is contemplating what’s next.

Editor’s Note (2022): Since that last update, Lorna continued adding squares to her quilt, working as the community services manager at Northern Kentucky University’s environmental resource management center and the senior environmental manager at the engineering firm, GAI Consultants, in Cincinnati. Lorna continued to produce scientific publications and presentations and was a tireless volunteer for several community and environmental organizations throughout her life.

Cover Photo: Lorna Petty on a training cruise in Cape Hatteras, circa 1971.