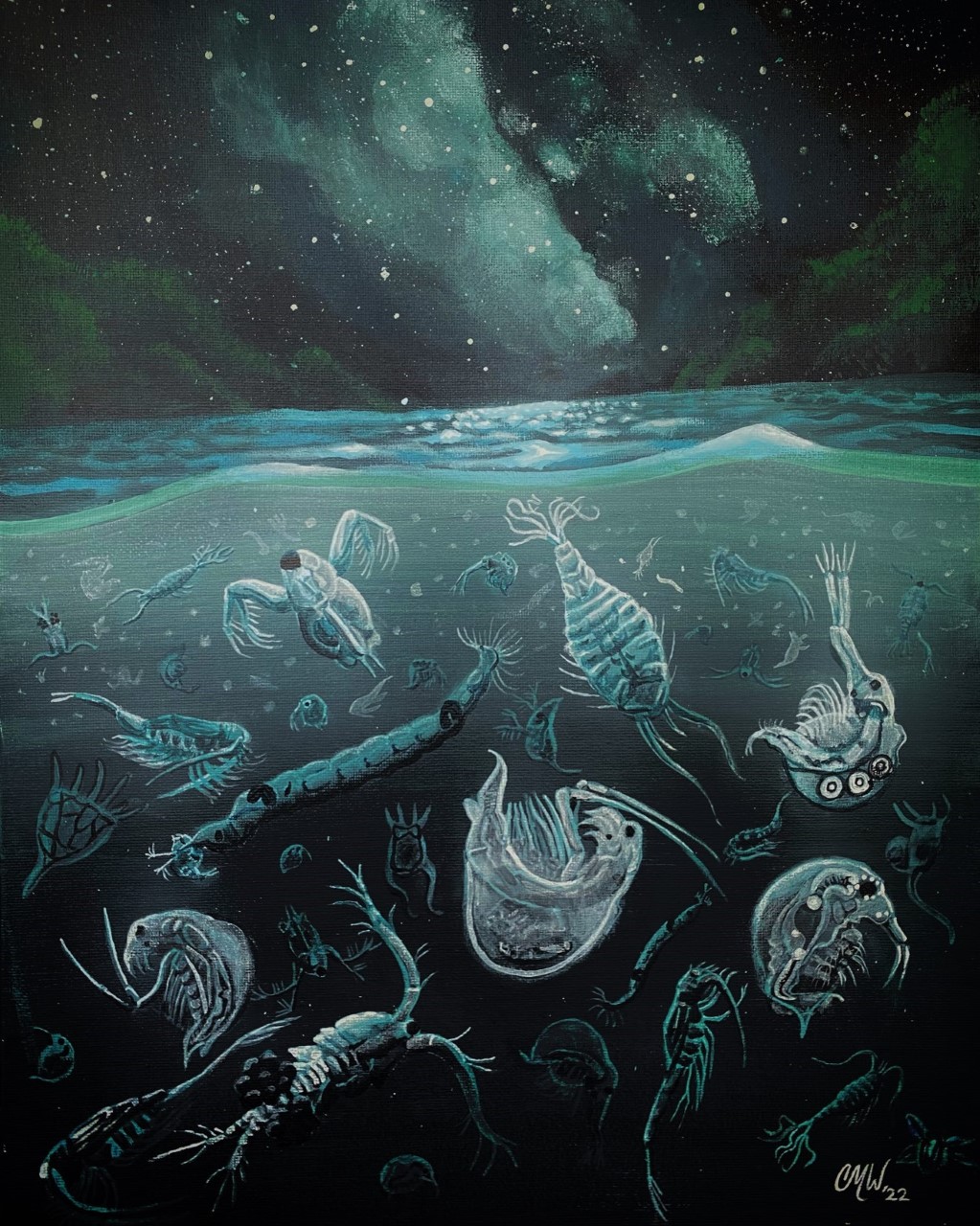 When looking at the lakes near Boulder Junction, Wisconsin, you might appreciate how scenic they are, or how many trophy fish they contain. However, UW Center for Limnology scientists at Trout Lake Station admire things that many would overlook. These scientists are studying miniscule creatures with massive importance – zooplankton. The crew of scientists at Trout Lake are spending the summer trying to unravel the intricacies of a nightly mass migration of zooplankton called diel vertical migration.

Diel vertical migration (DVM) occurs in a wide variety of animals and is the largest synchronous migration in the world. Animals that migrate – including zooplankton, squid, copepods, and some fish – traverse the water column as light fluctuates. During the day, zooplankton stay near the bottom of lakes to avoid predation but at night they rise up to surface waters so they can eat algae. While that might not sound impressive, it’s important to keep in mind that these tiny animals are only 0.2-3 mm long. So, if a .2 mm-long zooplankton rises about 30 feet (10 meters) in the water column to eat at night, that means it has traveled 50,000 times its body length to get there. That’s the equivalent of a five-foot-tall person going 50 miles to get dinner and, before daylight, going back to where they started. Imagine that journey in a lake that’s 100 meters deep!

Zooplankton may be tiny, but they are crucial to the structure of lake ecosystems by grazing on algae and being the main source of food for most larval fish, many adult fish species, and other larger zooplankton predators. They also are surprisingly cool in their own tiny ways. Bennett McAfee, who helped create modeling software for migration patterns as a student at Lawrence University, has developed an appreciation for these little creatures.

“The shear complexity of such simple-looking creatures is astounding. These little animals that you can only barely see with the naked eye and that most people don’t ever think about are capable of some fascinating behaviors and really complex interactions with other species,” says McAfee.  “Zooplankton are a marvel of evolution and are incredibly important to the aquatic ecosystem, which makes them incredibly interesting.”

“The DVM behavioral model that Dr. De Stasio and I are working on aims to be able to estimate the intensity of migration of Daphnia based on the physical and biological characteristics of the lake. We give the model various pieces of information about a lake (temperature, food availability, light levels, and fish abundance) and it will give us an estimate as to where Daphnia are within that lake both during the day and at night,” McAfee said.

The team at Trout Lake Station is trying to find out how changes in DVM patterns might affect lake ecosystems and productivity. According to Dr. Bart De Stasio, a professor of biological sciences at Lawrence University and one of the lead scientists on the project, there are many reasons why understanding migration patterns can be useful to managing lakes now and in the future.

“DVM studies can provide a better understanding of how fish and invertebrate populations are competing for food resources,” he said. “They can also help us understand how water quality may be related to fish/plankton interactions as well as nutrient loading. In addition, this may provide insights into how light pollution might affect lake productivity and water quality because increased light on lakes at night may keep [zooplankton] from migrating to shallower waters and reduce overall grazing on algae.”

While Dr. De Stasio and McAfee work on modeling this behavior, two undergraduate researchers are collecting the data integral to perfecting the model. Eleanor Meng and Reese Lavajo are two students at Lawrence University who came to Trout Lake Station this summer to assist with the project.

“We will be taking samples of different depths in the lake with a device called the Schindler-Patalas trap,” Meng said. We are also planning on using an underwater camera to track Daphnia horizontal migration and how this factor can also influence vertical migration.”

While the undergraduates are both most excited to work with underwater videography to capture the movement of zooplankton, not all their work is fun in the field.

“A lot of our study is done under the microscope– identifying species, counting them, and measuring their sizes,” Lavajo said.

While the DVM study is sure to have an impact on the scientific community, it has personal impacts as well. For McAfee, working at Trout Lake Station cemented what he was interested in doing.

“Working on this project introduced me to the intersection of limnology, statistics, and data science that has informed the direction that my very young career is going and the direction I want my future studies to take me,” McAfee said.

For Meng, the project created an opportunity to share a less understood and appreciated side of limnology. While the study creates an opportunity to further her career, she also is excited about a different outcome.

“On a personal level, I’m interested in increasing public awareness of Daphnia and other invertebrates using visual references and images,” Meng said. “They’re cute creatures and I’d love to share this side of aquatics!”

On a broader scale, McAfee is excited about what the improvement of advanced ecosystem modelling means for the future.

“Dr. De Stasio first published the earliest version of this model back in 1993 and back then, running a simulation for one lake on a university computer took hours,” he said. “Today, I can use my laptop to run an enhanced version of the same simulation in less than 40 seconds. The ability for scientists to gather information quickly and efficiently and then use it to make informed decisions is only growing, and that trend makes me very excited for the future.”

So the next time you’re at a Wisconsin lake take a second look at the water before you.  While you might not be able to see them, you know that in the deep waters, zooplankton are awaiting nightfall so that they can begin the epic daily migrations that play a critical role in the health of the lake.