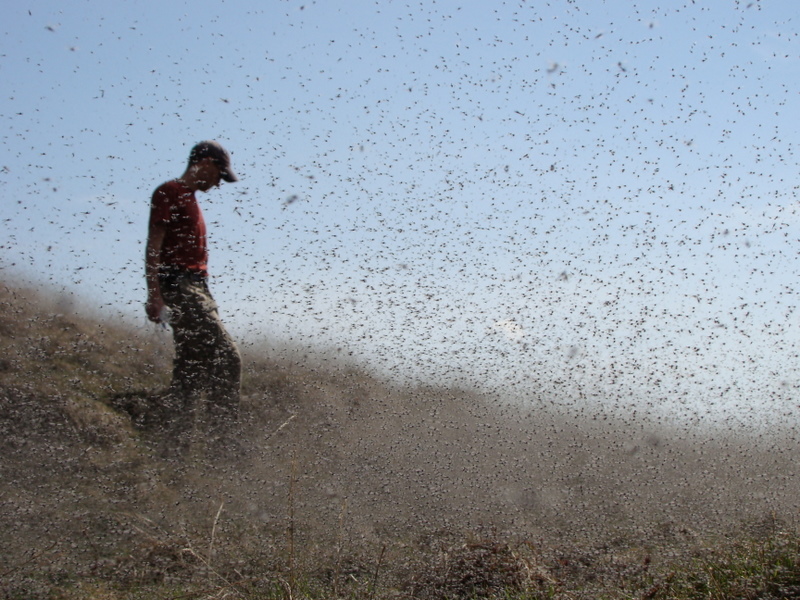 As we wrote last week, our waters are warming here in Wisconsin (and, in fact, all across the Northern Hemisphere) and fish are on the move as they migrate to their spawning grounds. But those swarms of fishes are all under the surface and often go undetected by the casual lake lover.

There’s another kind of swarm, though, that’s impossible to ignore. If you’ve walked along a lake during a warm, calm day you’ve probably already encountered them. If not, don’t worry, they’re coming.

We’re talking about midges, known to a lot of folks as “lake flies.”

While the really impressive swarms aren’t here yet, as soon as people have to start fanning away those pesky clouds of tiny flying insects, we overhear a  pretty common conversation this time of year.

Person 1: “Ugh, can you believe these swarms of bugs?”
Person 2: “Yeah, those are the mayflies. They’re always bad in the spring.”

If by, “bad,” Person 2 means “astonishingly abundant,” then yes. April kicks off the swarms and May is peak “badness.” But those clouds of little flying buzzing bugs are not mayflies nor are they mosquitoes, another often misidentified culprit. In fact, if you wanted to argue about “badness,” mayflies are pretty disruptive swarmers – showing up on radar and causing traffic problems across the U.S. nearly every year – while mosquitoes form clouds of thirsty blood-suckers.

Midges are more on the “pesky” side of bug annoyance. Yes, their humming clouds sure are drawn to light and will absolutely cover your siding or windows but, unlike the mosquitoes they resemble, they don’t bite and, unlike mayflies, they’re not big enough bugs to cause car crashes!

So, you might be asking, what’s this got to do with limnology? Well, what we see (or swat at) along a lakeshore is the midge in its adult form. Before they emerge to cloud our skies, they are little worm-like larvae that live down at the bottom of lakes and streams, where they eat decaying plant matter and are, in turn, a big food source for a lot of fishes. Here is a really cool video of midge larvae swimming to the surface of a lake and emerging to adulthood.

Once those larvae emerge as flying adults, they stop eating and have only one thing on their minds – mating. So they gather in huge clouds and, well, get to to know one another. After mating, the male eventually expires, with the female not far behind – but first she’ll return to the water to lay her eggs.

During this brief period of an airborne existence, midges become an important food source for birds. You’ll often see barn swallows and purple martins skimming the surface of the water as they take advantage of this plentiful buffet.

And midges don’t just feed the birds and the fishes. While our annual midge season in Wisconsin sure can be pesky, just be thankful that you don’t live along the shores of Lake Myvatn in Iceland, which is home to Biblical plague-level swarms of midges.

Researchers at the UW-Madison have been studying Myvatn’s midges over the last several years and have found that there are SO many midges in their study area that the piles of little insect carcasses after big emergence events act as fertilizer for the surrounding countryside. It’s such a big input of nutrients to the system that midges can convert scrubby tundra into a flourishing grassland!

If you want to know how many midges it takes to pull that off, well, the picture below pretty much sums up what those field experiences can be like.

Anyway, now you know – mayflies, mosquitoes and midges are all prone to epic swarms, but they’re not the same thing. And if you’re anywhere near a lake in Wisconsin (or across much of the U.S.) this spring, you can now say “Wow, the midges are really good this year.”