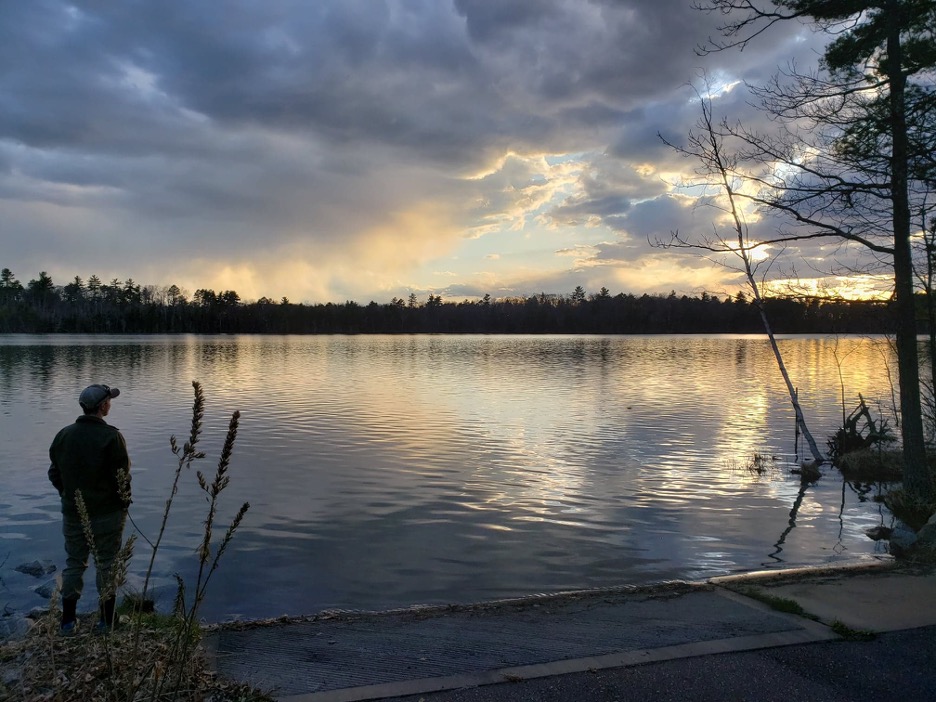 by Cassie Gauthier – Each individual lake is like its own “mini world.” They all are unique in their shape, size, water depth, water temperature, and plant and animal composition. Often, the current conditions of a lake can tell the story of the lake’s past, and how it could look in the future.

Each individual species living within this mini world of a lake has a tremendous impact on everything else living within it. Aquatic plants can provide shelter for fish to hide from their predators, or shelter for large predators to sneak up on their next meal. Eagles can find a home on the branch of a large pine tree near the shore and watch for a big fish, before swooping down to catch it and feed to its newly hatched babies. Even fish like walleye, muskie, and bass – who don’t commonly eat each other – can still compete for the same source of food and shelter in the lake, and thus impact each other greatly.

For Joe Mrnak, a graduate student at the UW-Madison Center for Limnology, these fish tales are going to help him earn his Ph.D.

Joe is studying two particular lake ecosystems, Sparkling Lake and Crystal Lake, and how fish interact within these “mini worlds,” or ecosystems. Lake ecosystems are constantly changing due to the interactions between species of fish. When a species dies out from a particular lake, or another one is introduced, a great deal of change can occur. If a smaller fish is no longer present, the larger predators of that fish may starve and decrease in population size, affecting everything that also interacted with the predators. Or, if another predator fish is introduced, the smaller fish population that they feed on can decline rapidly, again starving the other predators or allowing for the organisms the smaller fish once ate to significantly increase in population size.

Over time, these changes can become so drastic that the same lake may seem like a completely new place.

In the early 1900’s a fisherman hoping to recreate the annual spring smelt runs of his youth stocked rainbow smelt in a small inland lake near Lake Michigan. The fish has been working its way to into Midwestern lakes ever since, with rainbow smelt invading Wisconsin’s lakes in the 1980’s. In Crystal and Sparkling Lake, the invasive smelt have had huge effects on native species like walleye and yellow perch, primarily by eating young fish and out-competing adults for food. They’ even appear to have pushed a native fish called cisco entirely out of the picture.

Joe is spending this summer using sampling techniques such as electrofishing, fyke netting, vertical gillnetting and hydroacoustic surveys to develop current population estimates of the fish in Sparkling Lake and Crystal Lake, understand where each species falls within the ‘food web,’ and identify where they spend their time in the water column.

In the fall, Joe will induce additional change to Sparkling Lake and Crystal Lake by stocking them with native cisco (also often called “lake herring”). Currently, rainbow smelt populations in the two lakes are at all-time lows (or, at least lows since they’ve been invaded!) and they will still be manually removed with fyke nets during their spring spawn, further suppressing the population. Joe hopes this opens up some ‘niche space’ that can be filled with native cisco. Cisco are particularly vulnerable to climate change because they are a cold-water species, so stocking them in these lakes that have excellent cold-water habitat will hopefully protect their population from further decline.

“The addition of cisco is most likely not going to eradicate smelt completely,” Joe says. “And it doesn’t need to. The hope is to control the smelt population so that walleye recruitment can kick off and the cisco populations can make a stronghold.”

Joe is also sampling three other lakes; Anderson Lake, Big Muskellunge Lake, and Trout Lake this summer. These lakes will not be manipulated, rather they will serve as reference systems.  “It is important to have reference systems so that any changes we may see in our manipulated lakes can be attributed to [what we’re doing] and not natural shifts within the ecosystem,” he says.

These types of whole ecosystem manipulations can be very complicated and include many different variables to think about, Joe says, but, they can be equally as exciting. Joe loves the thought of being a part of change to an ecosystem and how readily the information from this project can be applicable to local managers (and anglers). He mentioned that the over-arching goal is to “increase ecosystem resilience by trying to shift the ecosystem state back, or at least closer, to its natural fish assemblage, for the long-term. Wisconsin is known for our walleye and perch fisheries, so we are hoping to boost fishing opportunities for anglers and tribal spearfishers around the area.”

It should also be noted that Joe is a big musky fisherman and said that he selfishly is excited because cisco are common where big muskies are found. It will be equally exciting to see how the “mini worlds” of Sparkling and Crystal Lake respond to this new change.